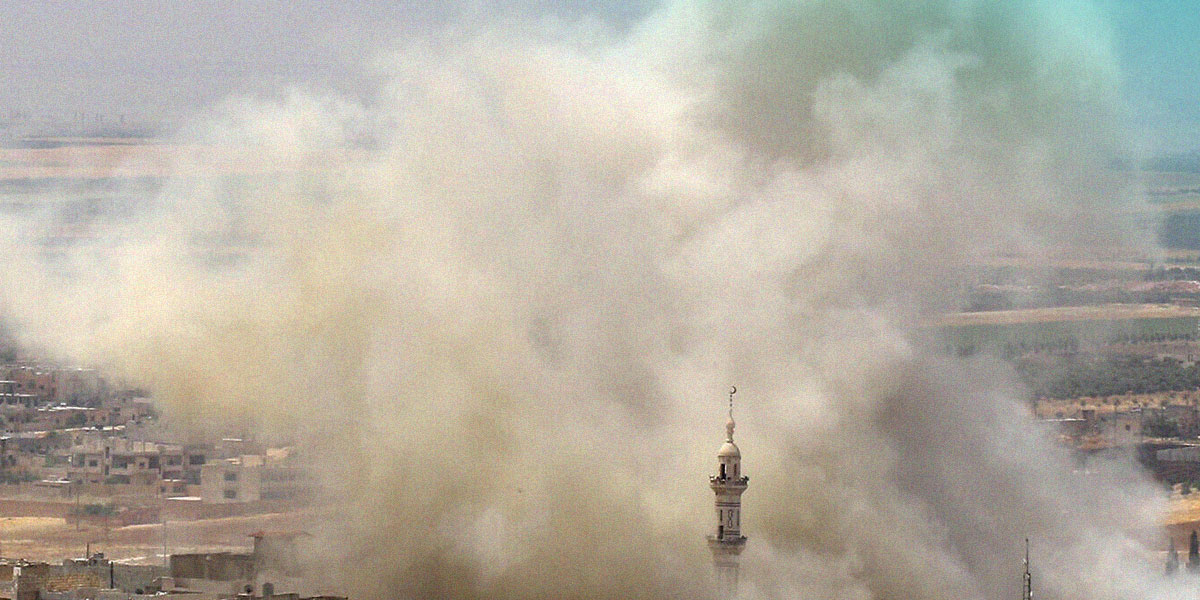 Banned in over 100 states, cluster munitions have been used systematically by the Assad regime and its Russian ally to kill hundreds of Syrian civilians—most recently a group of schoolchildren.

Last Wednesday, an elementary school in the north Syrian city of Sarmin was struck with cluster munitions, killing three pupils along with five adult civilians. The canister of the Russian-made Tochka missile that delivered the munitions fell 850 meters away, dispensing approximately fifty smaller submunitions over the area encompassing the school and the surrounding buildings.

Munitions of this kind are intended to maximize casualties. In recent years, the Bashar al-Assad regime has adopted a general strategy of spreading terror among civilians so as to compel them to vacate residential areas in search of refuge elsewhere. Among the many means by which it has waged this campaign is the capricious use of cluster munitions, which by definition are capable neither of precision nor of discrimination between civilian and military victims.

In a note on the Convention on Cluster Munitions (CCM) available on the UN website, Deputy Chief Judge of the Court Martial of New Zealand Kevin Riordan writes that “the term ‘cluster munitions’ refers to any of a number of weapons systems which, as the name suggests, deliver clusters of smaller explosive submunitions onto a target.” They may be “delivered by missiles, artillery, or strewn from fixed dispensers, [or] dropped in bombs from aircraft.” Their attractiveness from a military perspective, Riordan adds, is that they bring about a “wide field of destruction,” offering “a high level of confidence that anyone within the target zone will be killed or grievously wounded.”

As of December 2019, no fewer than 487 cluster munitions attacks in Syria had been documented by the Syrian Network for Human Rights (SNHR) since their first recorded use in July 2012. Of these, the Assad regime was responsible for 243, while Russian forces bore responsibility for 236; the remaining 8 were carried out jointly by both parties. In total, at least 1,019 civilians, including 375 children and 215 women, were killed in these attacks, per the SNHR data. Moreover, no fewer than 357 civilians, including 107 children, were killed by the detonation of previously-unexploded cluster munitions left behind by prior attacks. Around 4,300 civilians have been wounded, many of them suffering limb amputations or other disfigurements.

Even higher figures were quoted by the Syrian Civil Defense (SCD, also known as the White Helmets), whose director for Idlib, Mustafa al-Haj Yusuf, told Al-Jumhuriya as many as 1,504 cluster munitions attacks had occurred between September 2016 and the end of 2019 alone, killing 326 people and injuring 1,657.

The Assad regime and its Russian ally use four kinds of cluster munitions, according to Yunus Amin, director of operations at the Syrian Mine Action Center (SMAC). The first are egg-shaped and silver-colored, intended for use against individuals, containing approximately one thousand metal balls 8mm in diameter, each ball containing TNT explosives. The second are spherical, again silver in color and used to target individuals, containing around 700 of the same TNT-filled metal balls. The other two types are cylindrical: one around 20cm in length and 5cm in diameter, used against armor, filled with C-4 explosives; the second 15cm by 5cm, also containing C-4. Both of the latter are capable of piercing armor 20-25cm thick.

Cluster munitions leave remnants over wide stretches of terrain. Their inherent imprecision is a key factor in the harm they inflict on civilians; they are liable to miss targets by as much as 150 meters. Moreover, an estimated 10-40% of their submunitions fail to explode, according to SNHR, rendering the unexploded submunitions akin to landmines.

Large swathes of northern Syria contain such unexploded submunitions, and it will take years of labor to unearth and remove or destroy all of them, according to the SCD’s al-Haj Yusuf. Children are the most susceptible to injury by these “time bombs,” as he calls them, since their small and shiny appearance encourages youngsters to approach and touch them.

The SMAC’s Amin adds that some of these munitions are equipped with timers set to detonate them after a certain number of hours or days. There are also types that explode due to heat or contact when approached, whether by humans or vehicles. Others are magnetic, latching into vehicles, while others still are detonated when shaken or brought into contact with the ground.

Raed Hassoun directs the SCD’s center for the removal of unexploded munitions in north Syria’s Ma’arrat al-Nu’man. He tells Al-Jumhuriya the center has teams trained to deal with unexploded ordnance by detonating them where they lie—a method he describes as rudimentary, but unavoidable, since the teams lack the equipment needed to transport and dismantle the munitions safely.

After placing the unexploded ordnance behind a barrier, securing the site, and informing local residents in the vicinity, the Civil Defense detonates them, Hassoun tells Al-Jumhuriya. The teams deal only with certain types of ordnance—they won’t tackle landmines, barrel bombs, large rockets, or containers filled with unexploded cluster munitions. Instead, these cases are handled by placing warning signs around them to prevent people approaching, then alerting the police station, local council, or other de facto authority of the munitions’ presence, in order for them to deal with them as they see fit.

The Convention on Cluster Munitions, adopted in Dublin in 2008, prohibits “the use, production, transfer and stockpiling of cluster munitions that cause unacceptable harm to civilians,” mandating the “adequate provision of care and rehabilitation for victims [and] clearance of contaminated areas.” The Convention, which entered into force in 2010, has been signed by over 100 states, though Syria is not one of them.

In his aforementioned note on the Convention, Judge Riordan writes that it is the nature and characteristics of cluster munitions—which cause them to harm civilian no less than military targets, and leave behind large quantities of unexploded ordnance, doing further capricious harm to civilians—that led them to be classified as illegitimate weapons in need of removal and destruction. The Convention requires signatory states to dispose of their cluster munitions stockpiles within eight years of the treaty entering into force for them, and to provide annual reports to the UN detailing the quantities, types, and locations of their remaining inventories.

The SCD’s Hassoun says the work of his center is divided into two portions. The first is the field portion, in which the teams destroy or place warnings around the cluster munitions. The second takes the form of awareness-raising campaigns within local communities, whereby the teams warn residents against approaching or handling the munitions, especially in areas that have faced direct cluster munitions attacks. They also visit schools, gatherings, women’s centers, workshops, and mosques to speak about the dangers of the munitions.

In addition, the SCD posts videos on social media, and distributes brochures of various kinds containing images of cluster munitions, in order for local residents to recognize them in the event of happening upon them. The distributed content also includes full explanations of the warning signs placed around unexploded ordnance sites, and telephone numbers to call if and when objects suspected of being such munitions are found. 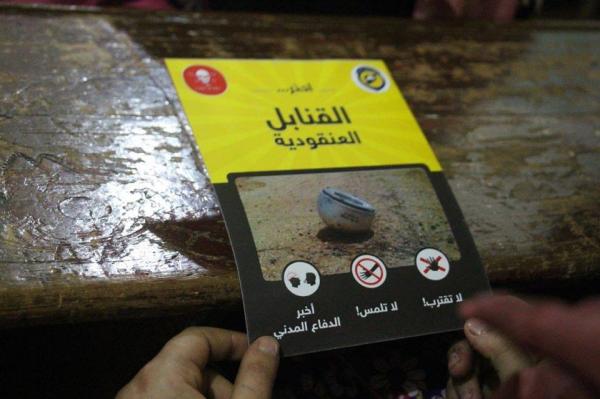 The use of cluster munitions represents yet another crime committed by the Assad regime and its allies against innocent Syrians living in opposition-controlled areas, as well as a flagrant violation of international law, which forbids their use even against combatants, let alone civilians. International law, however, was of no help to the schoolchildren killed in Sarmin last Wednesday; nor to the 16 refugees killed in the Qah camp near the Turkish border in November; nor indeed to any other of the hundreds of Syrians murdered or maimed by the same munitions throughout almost nine years of war, and counting.

[Editor’s note: This article was originally published in Arabic on 16 January, 2020.]

Mustafa Abu Shams Syrian writer and research.
Alex Rowell Alex is a Beirut-based writer, translator, and managing editor of Al-Jumhuriya English. His first book, 'Vintage Humour: The Islamic Wine Poetry of Abu Nuwas', is due to be published by C. Hurst & Co. in November 2017. He tweets @alexjrowell.