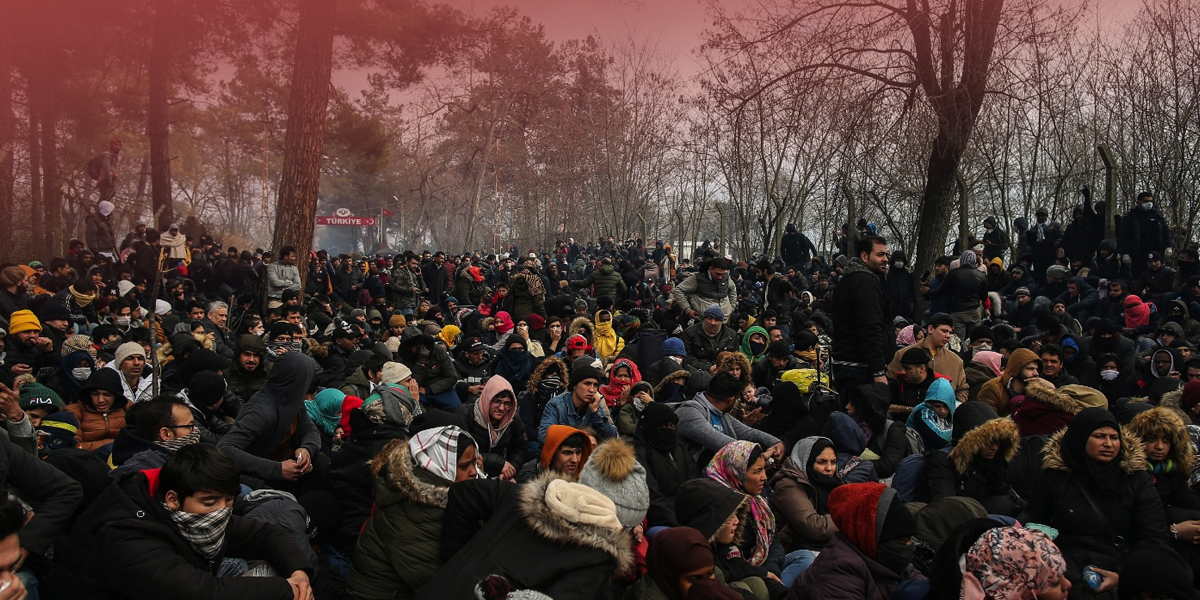 The temporary lives of Syrians

The shameful scenes this week on the Greek-Turkish border, where at least two have died, underscore the need to offer long-term stability to Syrians’ lives, in contrast to the extreme temporariness of their current existence.

To comment on the recent events at the Greek-Turkish border requires conjuring sentiments that go beyond mere, but necessary, disgust. A new low has been found in the means, political and rhetorical, of handling the Syrian refugee tragedy by Turkey and the European Union.

In the last few days, thousands of Syrians gathered in the main squares and streets of Istanbul seeking transport to the border, where they went on to sleep in the open air. If they succeeded in crossing, they were met with the violence of the Greek border guards, who have so far shot dead one young man, Ahmad Abu Emad, and injured dozens more. At least one child also drowned at sea off the island of Lesbos, where local residents have physically prevented boat passengers from disembarking. All this unfolded at catastrophic pace, within the span of mere hours and days, leaving us wonder anew about the situation of thousands upon thousands in the Syrian diaspora.

From the moment developments in Idlib led Turkish officials to announce they would no longer prevent the passage of refugees into Europe, the crowds in Istanbul congregated, and the convoys were in motion. Within a matter of hours, between the nighttime news and the crack of dawn the next morning, thousands of Syrian refugees in Turkey—individuals and families; young and old; men, women, and children—had prepared themselves for the unknown, with little hope to go on but Turkey’s verbal statements. They were little concerned with analyzing these statements, politically or morally, nor were they troubled by the confusion as to whether it was all just a rumor, or a rhetorical device without practical effect. The statements were, simply, seen as a golden opportunity to be seized without delay. Among the many things this demonstrates is how absolutely temporary the lives of so many Syrians are today. They have nothing to stop them packing their small, light bags and leaving everything behind in the space of a few hours. No homes, jobs, or schools cause them to hesitate or seek alternatives. Naturally, no memories, feelings, or attachments to places or people can be permitted to obstruct their rapid transition from one bad temporary condition to another hoped to be slightly less bad. The fundamentals of life, material and immaterial, are only burdens weighing down the Syrians of the temporary, who have learned the necessity of living without them for days, months, years, and the entirety of the foreseeable future.

We stare at the images from the Greek-Turkish border, and have to remind ourselves that these people sleeping in the open air are supposed to be “survivors” of the bottomless Syrian tragedy. Yet the tragedy persists over there, in the Syrian interior (or interiors), along the Syrian-Turkish border zone, particularly in Idlib. There are countless other “survivors,” millions across the Syrian diaspora, experiencing various forms of this same temporariness, be it the ambiguity of their legal status; the scarcity and/or instability of their income; or their dependence on aid. This vulnerability of refugees may be nothing new or specific to Syria. Nor are complaints about refugees and attempts to get rid of them, sealing borders in their faces, and demanding they show gratitude and loyalty for the few rights they’re granted. This is the story of most waves of refugees in the modern world. What is novel, however, is the continuous chorus of shameless effrontery, and the political and moral misery offered by international actors such as Greece, which, by sheer coincidence, just announced military exercises with live ammunition near its eastern borders. The same can be said of the European Border and Coast Guard Agency (Frontex), whose official Twitter account has been posting photos of policemen from several European countries who have come to Greece’s “aid” now that it’s confronted with an external “threat.” These men in uniform gaze through their binoculars, scanning the horizons in a spectacle suggesting invasion by a dangerous enemy, rather than civilians struggling to endure the most difficult lives imaginable. These are only two examples of the behavior of democratic actors often critical of Turkey for its flagrant instrumentalization of refugees. Such criticism is valid, coming from us, but only half-valid from them, who are indispensable partners and actors responsible for this scandal.

The oppressive cruelty of all this requires us, at this moment, to name and shame, and demand help for our people, those living in the temporary, sleeping outdoors along the borders. Yet it’s also vital that we turn our gaze to this temporary condition itself, now weighing upon millions of Syrian refugees at all levels of suffering and stability. Perhaps breaking this impermanence requires a revolt against the concept of “refuge” itself; a re-establishment of the political meaning, in the Syrian context, of the need to form networks of support, aid, and mutual cooperation, in order for the largest number possible of refugees to cease to be “refugees” in the legal, economic, and political senses, as soon as possible. This would mean Syrians controlling the bare minimum of their life circumstances; obtaining legal papers and a stable legal status; emerging from the system of aid and instead earning their living without others complaining or expecting gratitude; and becoming free of the narrow meaning of refugeehood—political, conceptual, and cultural—imposed on refugees not only by the racists who reject their presence, but also the political and state actors to whom refugees are hostages, either to be threatened, or obliged to thank their hosts, or used to threaten other states. This even applies to those expressing solidarity with refugees, whose noble intentions and principles nonetheless fail to note the vertical and unequal nature of “solidarity,” which imprisons refugees within their status qua refugees. At all times, they must act as refugees, consume as refugees, speak as refugees, and produce a “culture of refugees.” Before they were refugees, they had no existence, and so it’s perhaps unsurprising that they meet with censure and condemnation if they diverge from what “refugees” are supposed to say and do, on the grounds that such divergences are irresponsible, potentially assisting anti-refugee tendencies.

By a comic paradox, there remain hopes for a utopia on the horizon in which Syrian refugees manage to obtain sustainable alternatives to their Syrian identity papers and passports, marking their emancipation from “refuge” and enabling them to become “Syrians” once again. This paradox is yet another example of Putinism’s contribution to the concepts of national sovereignty and identity.

And yet, for all these problematic aspects of refugeehood, what is most urgent today is to work for the people of the temporary in Edirne to become “refugees” of any kind, however the term may be interpreted.

[Editor’s note: This article was originally published in Arabic on 3 March, 2020.]