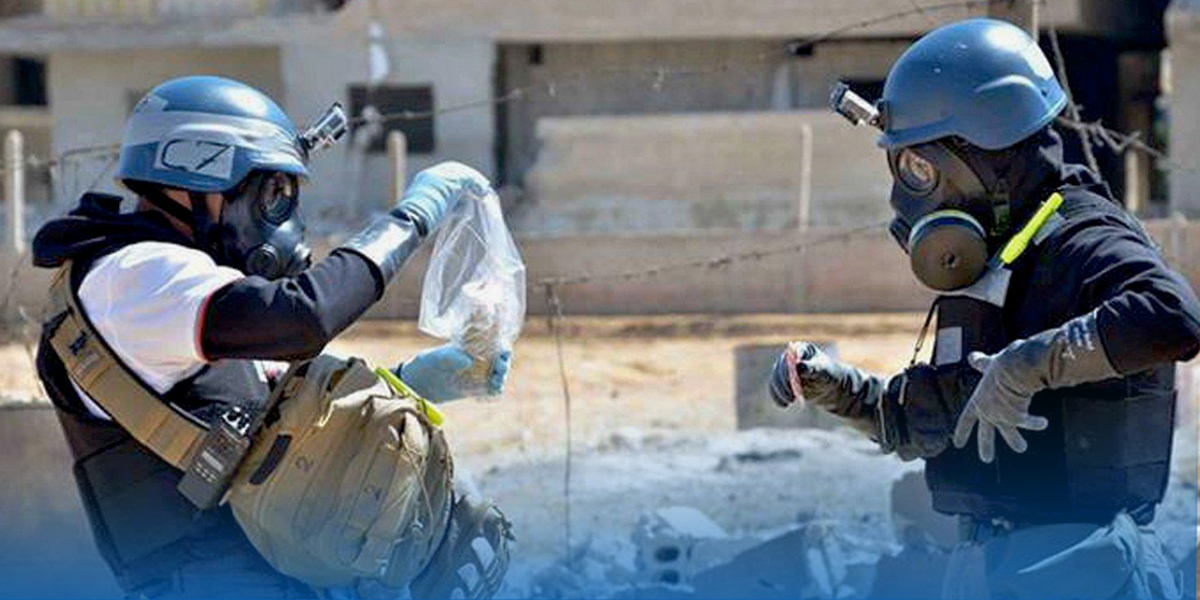 Chemical crime and no punishment

Human rights experts tell Al-Jumhuriya the recent OPCW report on Assad’s chemical attacks could form crucial evidence in future war crimes trials—if there were ever enough international political will to hold any.

Earlier this month, the Organization for the Prohibition of Chemical Weapons (OPCW) announced that its new Investigation and Identification Team (IIT) had completed its first report, concluding that chemical weapons were used by the Bashar al-Assad regime on three occasions in the Syrian town of al-Lataminah, northwest of Hama, in March 2017.

Two of the three attacks—those on 24 and 30 March—involved the nerve agent Sarin, while the third, on 25 March, featured chlorine. In all three cases, the munitions were delivered from the air. The IIT was able to precisely determine such details as the types of aircraft responsible; the air force divisions to which they belonged; the air bases from which they took off (and at what times); and the numbers of casualties.

The IIT was established by the OPCW in June 2018, with the aim of identifying the perpetrators of chemical attacks previously confirmed by the now-defunct OPCW-UN Joint Investigative Mechanism (JIM). This month’s report is not the first time the OPCW has declared the Assad regime responsible for chemical attacks; in October 2017, the JIM named the regime as the perpetrator of the deadly Sarin strike in Idlib’s Khan Shaykhun on 4 April, 2017. What is new, however—beyond the report’s findings themselves, some of which were not previously known to the public—is that the IIT was created by the OPCW’s own Conference of the States Parties, and thus is not hostage to Russia’s veto at the UN Security Council, as was its JIM predecessor. In theory, then, the IIT will be free to continue investigating further attacks, unlike the JIM, which Russia brought to an end with its Security Council veto in November 2017 following the report on Khan Shaykhun the previous month.

Human rights activists tell Al-Jumhuriya the inaugural IIT report into the al-Lataminah attacks has great legal and political significance. According to Fadel Abdul Ghany, director of the Syrian Network for Human Rights, it constitutes “evidence incriminating the Syrian regime, which any public prosecutor or court may now take and build upon further. Of course, such courts would also conduct further investigations, but the report has already done much of the legwork of the litigation process.”

For instance, the report has established a crucial element required in any criminal conviction, namely the existence of criminal intent. “The Sarin attacks were calibrated in accordance with weather factors, timed so as to coincide with sunrise, when the air moves slowest, on a day selected for its ideal weather from the perspective of spreading Sarin vapors as widely as possible,” says Abdul Ghany. “This required diligent planning, which demonstrates the regime’s premeditated intent to commit the crime.”

Similarly, Mohammad Al Abdallah, executive director of the Syria Justice and Accountability Center, commended the IIT report as a “very precise” and “in-depth” investigation. The IIT “collected detailed testimonies, and additional material forensic evidence such as chemical samples, which were then analyzed in high-tech laboratories, along with parts of the munitions used such as the barrel that stored the chlorine.” Al Abdallah added that the investigation was evidently conducted to a high degree of competence and professionalism. “They took all conceivable scenarios into account, including the possibility that the strike was faked, or that the military division that carried out the Sarin strikes had defected, or was operating without orders. All of these scenarios were refuted, and the hypothesis that the regime gave direct orders to use Sarin and chlorine in the al-Lataminah attacks in March 2017 was confirmed.”

Another key aspect of the report’s significance is that it was issued by a body not governed by the rules of UN committees, which may not be used in legal proceedings. The IIT report, by contrast, may form part of the evidence in any future litigation undertaken against Syrian regime officials for their criminal use of chemical weapons.

“The first IIT report is an important step forward in the investigations into the use of chemical weapons in Syria,” says Dr. Mohamad Katoub, policies and advocacy manager at the Syrian Center for Media and Freedom of Expression. “Yet despite the report’s importance—legally, first and foremost, but also politically and in media terms—the path of justice and accountability remains thorny. It requires enough international will for a state or group of states to go to the International Criminal Court, which has jurisdiction with respect to the use of ‘asphyxiating, poisonous or other gases’ under Article 8 of the Rome Statute.”

On that note, the OPCW Director-General Fernando Arias stated upon the report’s release that the IIT “is not a judicial or quasi-judicial body with the authority to assign individual criminal responsibility, nor does the IIT have the authority to make final findings on non-compliance with the Convention […] It is now up to the Executive Council and the Conference of the States Parties to the Chemical Weapons Convention, the United Nations Secretary-General, and the international community as a whole to take any further action they deem appropriate and necessary.”

The above means that merely proving the Assad regime’s use of chemical weapons is not sufficient to determine individual criminal responsibility, which would be the principal obstacle to any litigation that Syrians might initiate in European courts, as they have done recently against members of Assad’s military and security agencies, based on individual or collective charges of crimes against humanity. On the other hand, however, the IIT report affirms that the use of chemical weapons in al-Lataminah could only have occurred as a result of decisions taken at the regime’s highest levels, and that the delegation of authority does not mean the delegation of responsibility, legally speaking, which may be one means of circumventing this obstacle.

In theory, there are various options available to prosecute perpetrators of war crimes and crimes against humanity. They include international tribunals, and European courts with universal jurisdiction to prosecute such crimes. In practice, the former option is all but impossible in Syria’s case, as it would require a UN Security Council Resolution, which could be vetoed by Russia. Neither is the European courts option much easier, as it would need chain of command evidence in order to place criminal responsibility on specific individuals.

“The report confirms that the Assad regime has violated the Chemical Weapons Convention, as well as UN Security Council Resolution 2118, the 21st clause of which ‘decides […] to impose measures under Chapter VII of the United Nations Charter’ in the event that the regime uses, produces, or transfers chemical weapons,” Abdul Ghany tells Al-Jumhuriya. “This puts political and legal tools in the hands of international powers to act if they really want to stop the regime.”

It may still be premature to speak of legal action against Syrian regime officials on the basis of the IIT’s new report. Nonetheless, the report may be the starting point in a long process of attaining justice for Syria’s victims, who were asphyxiated to death in their homes by toxic chemicals, in a crime for which it has been definitively established that the Assad regime was responsible.

[Editor’s note: This article was originally published in Arabic on 22 April, 2020]