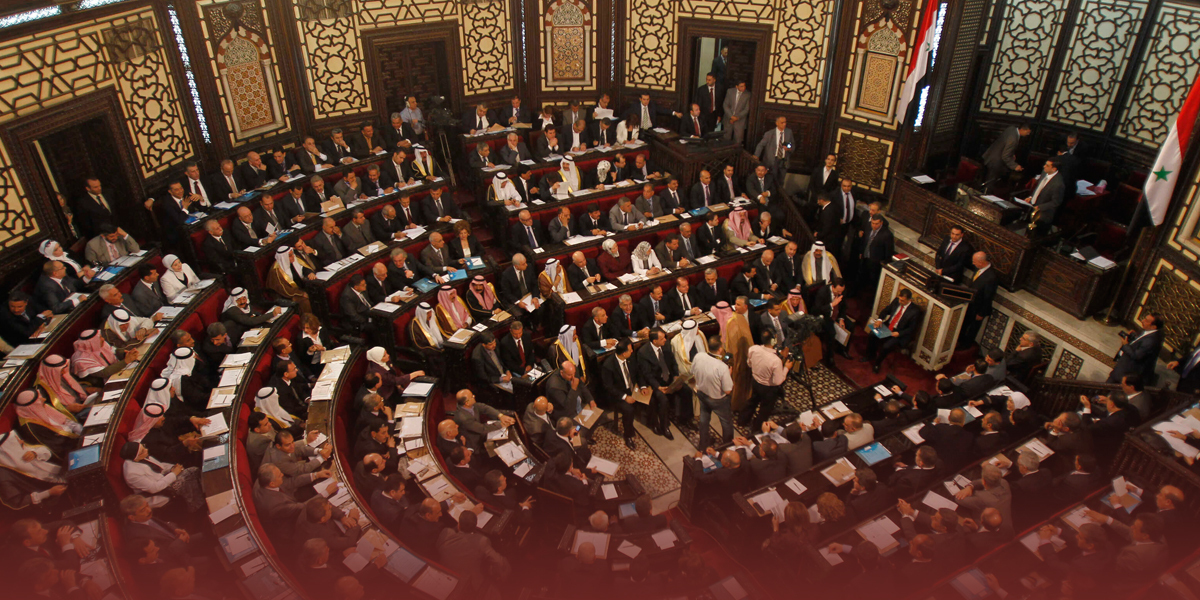 For fifty years, the Assad regime has stripped Syria’s parliament of both de facto and de jure powers. This month’s “elections” marked a further decline in the already-negligible relevance of the institution.

Ever since the Assad family seized power in Syria almost fifty years ago, the national parliament has been reduced to an object of widespread ridicule. Officially known as the People’s Council, it was turned by Hafez al-Assad’s regime into a caricature of a toothless legislature. The ratification of the 1973 constitution saw legislative power—already de facto in Assad’s hands—transferred formally to the presidential palace in de jure terms as well.

At the social level, however, the People’s Council previously had a certain role beyond this mere window-dressing, consisting chiefly in cementing the influence of new figures emerging in communal, tribal, and economic circles, as well as preserving the influence of those who enjoyed Assad’s confidence.

The distributions of parliamentary seats established by Assad père prevailed at all times, and set the parameters of its role up to the present day. In particular, the seats allocated to so-called “independents” in each governorate were a means by which Assad could involve local dignitaries in the power equation—to a minimal extent, of course. The aim was to maintain their absolute loyalty, which he often needed for political reasons, large or small, in their specific regions. In the late Omar Amiralay’s film A Flood in Baath Country, for example, the MP Diab al-Mashi says his clan was quick to send 100 armed men to confront the Muslim Brotherhood in Aleppo during the clashes between the regime and the “Fighting Vanguard” militants in the late 1970s and early ‘80s.

In exchange for this loyalty, a People’s Council member obtained influence among the people of their region, and became their link to Damascus when they needed to get things done, even if the MP extorted them in the process. Council seats were also distributed somewhat differently in Aleppo and Damascus, where almost all independent seats were reserved for the cities’ traders and manufacturers. The latter had to win the consent of their counterparts in order to gain a seat in the Council, which would render them representatives of their class to the regime. Representation in the Council varied according to the distributions determined by Hafez al-Assad and his security apparatus. He might strengthen the tribal structure in certain areas, for example, while isolating it from public life or weakening it elsewhere. He allowed historically-feudal families to maintain their influence in some areas, and stripped them of the same influence altogether in others. In short, he did whatever was required to ensure the interests and continuity of the regime. This remained the case up until the Syrian revolution.

When the revolution erupted, it became clear to the regime that the local dignitaries it had fattened for decades were no longer successful as links with the communities that rebelled against it. Equally, the imposition of a direct security solution would be damaging to these people, making it impossible for them to continue playing their role. As a result, we witnessed numerous transformations, with some of them turning against the regime, while others preferred to stay loyal, abandoning their local communities and relocating to areas of regime control where necessary. The upshot was a loss of influence for the dignitaries, in favor of the new militias and warlords.

This began to be reflected in the People’s Council “elections.” The ones that took place last Sunday were no exception. Most independent seats went to militia leaders, militia-linked businessmen, and representatives of the families of pro-regime fighters killed in battle. In Damascus and Aleppo, however, the old make-up was retained, with independent seats continuing to be reserved for traders and industrialists. What matters is not the extent to which such businesspeople truly represent their milieus, but rather the extent of their loyalty to the regime. The conspicuous withdrawal of the businessman Muhammad Hamsho does not appear to have heralded any significant change, as his list was replaced by that of his fellow industrialist Samer al-Dibs, who acquired the independent seats in Damascus.

As for the rise of certain new names from areas recaptured by the regime in the past two years, this will seemingly be an opportunity to promote “businessmen” who in reality are front men for senior security officers and other influential figures. For instance, sources tell Al-Jumhuriya that one candidate in the town of Douma, Amer Taysir Kheiti, the owner of Kheiti Holding Group, is purely a front man for Ghassan Bilal, director of Maher al-Assad’s office and head of the Fourth Armored Division’s security bureau, whose name has appeared on multiple sanctions lists, including the most recent arising from the US Caesar Act.

A closer look at other winning candidates would reveal more of the new faces likely to emerge in such governorates as Rural Damascus and Daraa. Yet there are no fundamental changes to be found in terms of the overall function of the Council, which remains in the final analysis no more than a cosmetic piece of furniture. Its former role as a link between local communities and the central authority in Damascus now appears to have been taken up by the ruling Baath Party, which has become more active in recent years, especially in former opposition-held areas retaken by the regime and subjected to forced displacements and so-called “reconciliations.” Today, it is through the local Baath branch that threats are delivered, requests made, and extortion conducted. From cities such as Aleppo to suburbs such as Eastern Ghouta, the noticeable rise in Baath Party activity demonstrates the revival of this institution, which had grown largely idle in the years prior to the revolution.

The Syrian constitution, both in its older form adopted in 1973 and its most recent version approved in 2014, grants the President of the Republic the power to legislate and issue laws during People’s Council sessions, or indeed in between them. It also allows the president to dissolve the Council. Syria, in other words, is deprived of even an ostensible or theoretical legislative authority. Rather than a parliament that issues laws for the president to approve, it is the president who issues laws that are then rubber-stamped by the members of parliament, who the most junior intelligence officer can intimidate and control, both inside and outside the Council walls.

The People’s Council continues, then, to lack any real role in government. We may be able to infer certain shifts in influence from the names of its members; each one of them overseen by one intelligence branch or other, assigning them a precisely-determined role. But this role will never involve exercising true political power. For fifty years now, neither politics nor legislation has been among the functions of the People’s Council.

[Editor’s note: This article was originally published in Arabic on 20 July, 2020.]