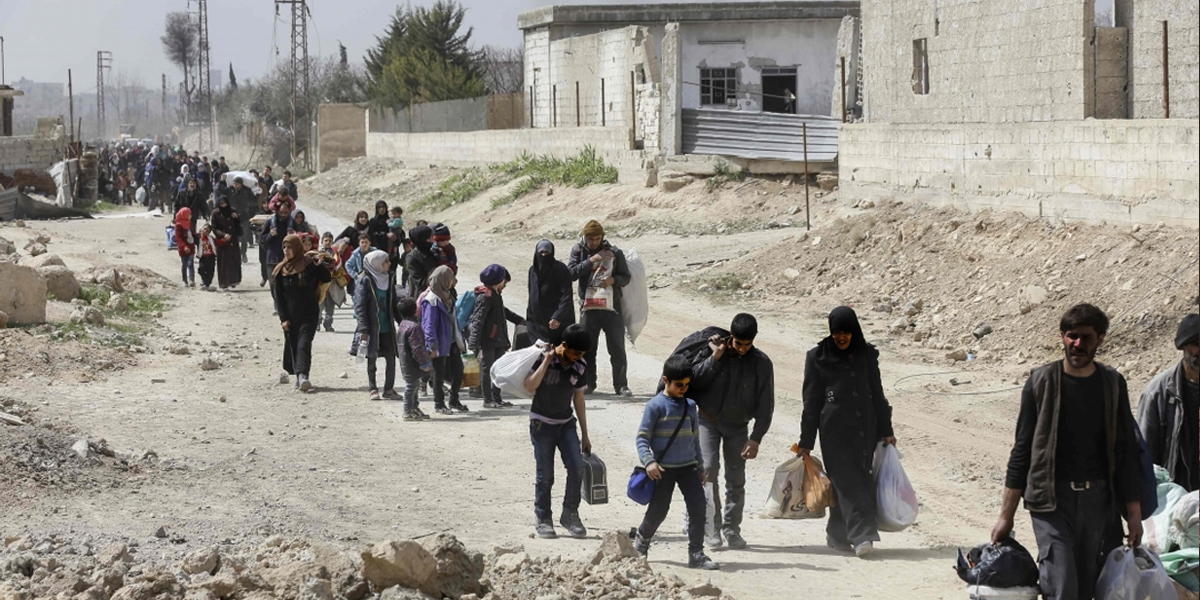 The famine looming today in Syria is caused not by a lack of food, but by policies consciously adopted by the Assad regime for many years, argues Yassin al-Haj Saleh.

[Editor’s note: The below is an edited version of a webinar delivered by the author in July 2020, as part of a series titled “The Syrian Revolution: A History from Below.”]

According to recent UN estimates, some 90% of the Syrian population lives under the poverty line of US$2 a day. 9.3 million Syrians need food assistance, while 1.4 million suffer from basic nutritional shortages. At this juncture, it is no exaggeration to talk about an imminent threat of famine; it may even be imperative to ring the alarm bells. In my view, this imminent famine amounts to public starvation, and an extension by other means of the democide—to use R. J. Rummel’s term—that has been ongoing in Syria for almost a decade.

Severe poverty is by no means a new condition in Syria. The process of pauperization was already underway before the revolution, though it has intensified in the last decade. The regime and its protectors blame social hardships on Western sanctions, the most recent of which arrived with the new US Caesar Act in June. This may be circumstantially true, though the sanctions merely aggravate a dynamic of comprehensive impoverishment that already existed. Some 37% of the population were under the poverty line in 2007, according to a UN report at that time. This percentage rose steeply after the revolution, reaching 80% by 2018.

Many tend to link this impoverishment to the neo-liberalization of the Syrian economy in the early years of Bashar al-Assad’s rule, especially in 2005 and after. I would argue it relates instead to what should be called state privatization; a process identical with the political history of Syria under the rule of Bashar’s father, Hafez, for 30 years. That Hafez bequeathed power to his son in 2000 was only the culmination of state privatization, guarded by a highly sectarianized security apparatus, supported in turn by equally-sectarianized elite military formations. The neo-liberalization of the economy in the first decade of Bashar’s rule was merely one aspect of the wider process of privatizing the state. The indispensable counterpart of state privatization is the absolute political impoverishment of the population. By political poverty, I mean denying the people the right to speak about public issues and gather in public spaces, or even in private spaces, as was seen in the fate of the Damascus Spring in the early 2000s. In previous decades, many independent and oppositionist political organizations were destroyed; the vast majority of their members arrested, tortured, and jailed for many years. In 1980, trade unions of lawyers, doctors, engineers, and other professionals were dismantled, with many of their prominent members arrested and jailed for years. They were only reestablished in 1981 after the regime took control of them.

In the absence of popular organizations, independent trade unions, and free expression, regime cronies were able to amass great fortunes. It was those known as abna’ al-mas’uleen (“the sons of senior officials”) who led the “freeing” of the Syrian economy in the first decade of this century. Bashar himself is one of them. His cousin Rami Makhlouf is, or perhaps was, one, as were the sons of Mustafa Tlass and Abd al-Halim Khaddam.

Poverty in Syria is by no means a matter of a lack of resources; it is precisely a matter of public resources being monopolized for the benefit of a new state bourgeoisie. This is the structural pattern against which the present situation must be understood. The fact the social struggle took extremely violent forms in the country is strongly connected to the emergence of a privileged class; a sort of aristocratic state bourgeoisie that conceives of itself as superior to those it rules, who are given subaltern status. This class even imagines it has a mission civilisatrice, which it calls “modernization” at times, and “secularism” during the Syrian revolution (hoping to sell this mission to Islamophobic audiences in the West).

The revolution erupted against the appropriation of public resources, central among them the state itself. Here, I mean from the perspective of the state as a public resource, indeed the public resource, political poverty and economic poverty converge. It was instinctively clear to many Syrians that appropriating politics, assembly, and speech was a major condition for “expropriating the expropriators.” Demonstrations were, precisely, popular efforts to own politics.The expropriators resorted to war to protect their extreme privileges. Before the revolution, Assad’s Syria was a torture state, and now its war is but a continuation of its systematic torture.

Two examples demonstrate the weaponization of basic needs—food and medicine in particular—in the regime’s torturous war. In 2012, regime war planes targeted people queuing in front of bakeries in the districts of Hama and Aleppo. The massacre in Halfaya, where at least 93 people were killed, was the most infamous of these attacks from the sky. Yet even more telling were the sieges imposed on many regions: Madaya, Zabadani, Yarmouk refugee camp, Eastern Ghouta, Eastern Aleppo, and the list goes on. These areas were besieged, pounded with barrel bombs and other weapons, and starved. There was even a brief rhyming slogan to epitomize the nihilist mission of siege: al-joo` aw al-rukoo`! (“You eat only when you surrender!”)

What I wish to say is that the famine looming today is tantamount to deliberate starvation, and should be seen as an extreme practice of the social war that Syria’s internal First World has been waging against its rebellious internal Third World.

Barrel bombs, chemical massacres, rape, torture, and murder in prison dungeons should be perceived as modes of social struggle adopted by an extremist class whose ideology is the state; more precisely the superficial or ostensible state, which is pan-Syrian and completely devoid of power, acting as a thick institutional hijab on the face of the familial-security complex ruling the country for half a century: the inner state, or deep state.

To conclude, the threat of famine is a continuation of starvation as a method of social war. What the latter aims for is the perpetuation of the system of absolute political poverty. The analytical starting point should thus be the process of political starvation as the ideal environment for “primitive accumulation,” from which we move to starvation as a weapon of war, then to the present famine threat. Politically, one should conclude from this that “expropriating the state from its expropriators”is the first step towards owning politics, which is a precondition for avoiding famines, according to Amartya Sen. This is the opposite of the approach taken by liberal development studies, where it is postulated that economic development leads to political opening. But it should not be thought of as a politicist theory to be applied dogmatically everywhere. Instead, it merely reflects a structure of an active and comprehensive denial of organization and political rights.

Recent data show rising rates of crime and suicide, even among children. Cronyism and mercenarism, including the sending of Syrians to fight in Libya by the Russians and Turks alike, are in part motivated by the poverty and despair of growing numbers of Syrians, particularly those who sought in 2011 to own their country, and have been punished so cruelly during this long decade. It is the tragic story of an impossibly crushed revolution.

Yassin al-Haj Saleh is a Syrian writer, former political prisoner, and co-founder of Al-Jumhuriya. His latest book in English is The Impossible Revolution: Making Sense of the Syrian Tragedy (Hurst, 2017).