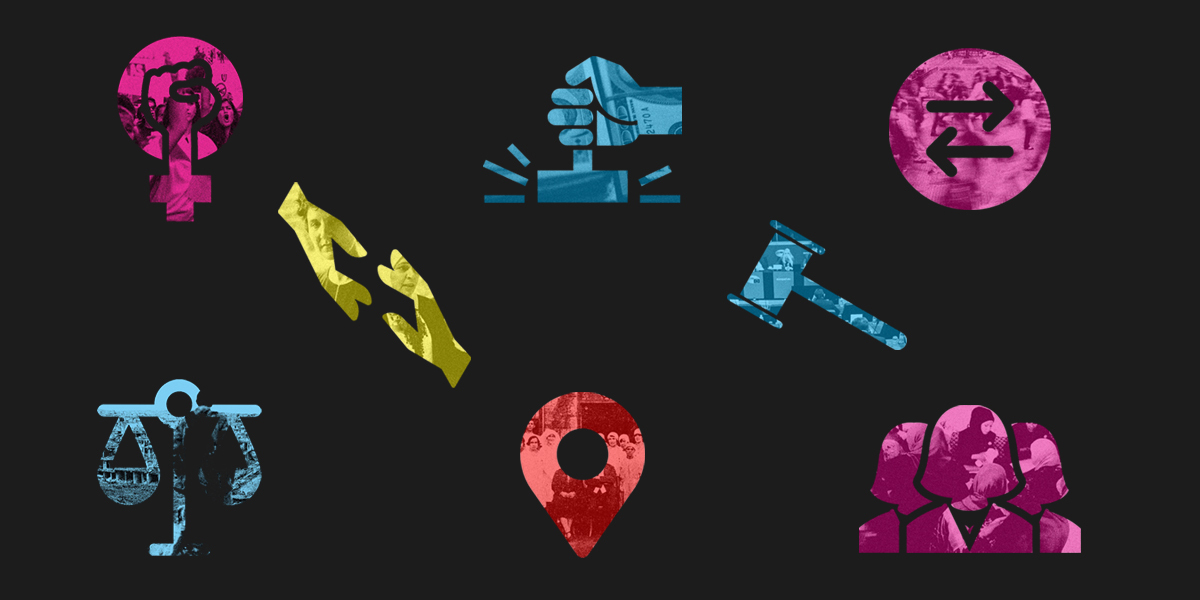 Since the revolution broke out in 2011, Syrian civil society and its many groups and organizations have emerged as a novel phenomenon. Ever since the issuance in 1958 of Associations Law No. 93, and the subsequent amendment to the law by Legislative Decree No. 224 in 1969, state surveillance of civil society associations has only ever increased, with approval from the security apparatus required in order to establish new entities. As a result, civil society was virtually absent, with only charitable and religious associations eligible for licensing. In a small number of other cases, in the 1990s, and then after the Damascus Spring, unlicensed human rights organizations emerged, causing their founders and members to be subjected to security restrictions that limited their ability to sustain their work or achieve the objectives for which they were formed.

Many believe that the form of civil society which emerged after the revolution is an extension of the revolutionary movement itself. A large number of organizations grew organically out of coordinated grassroots action, and many activists established their own civil society groups or joined existing ones. In these early stages, civil society was dominated by emancipatory activism defined by the values of the revolution. Today, nine years on, we face a crucial question: can civil society still be defined within this framework?

The form of civil society that emerges as a result of popular movements, or in conflict situations, is distinct from others. Just as a stable environment affects the identity and nature of civil society, so a politically, socially, culturally, and economically volatile one imposes its conditions in turn. The nature of the surrounding context affects civil society’s formation, development, and interaction with public issues in various ways. When it grows out of popular movements and in an atmosphere of conflict, this has ramifications for its sources of funding and support, and the agendas of the warring parties and those who support them are also of great significance. In such environments, civil society typically depends entirely on external support, as local or national forms of support are nonexistent in the absence of the state. This is especially true when the state is the main cause of the situation to begin with. Syrian civil society is often seen as adopting an overall emergency response approach, which is linked in turn to changes in the political arena. Sometimes this view is used to generalize not only the civil society work that focuses on services and relief activities (which, by its nature, is emergency response work), but also that engaged in securing rights and changing public discourse.

Syrian civil society has fought many battles and faced many challenges since 2011. Activists in the field have too often been forced to make morally tough decisions. Yet we also cannot generalize here, because in reality some civil society actors chose not to engage in such ethical discussions and remained set on neutrality. The neutral discourse they adopted grew especially after 2015, driven by funders’ insistence that civil society must be neutral. These pressures often arose in the context of already-difficult situations, such as economic sanctions and reconstruction. 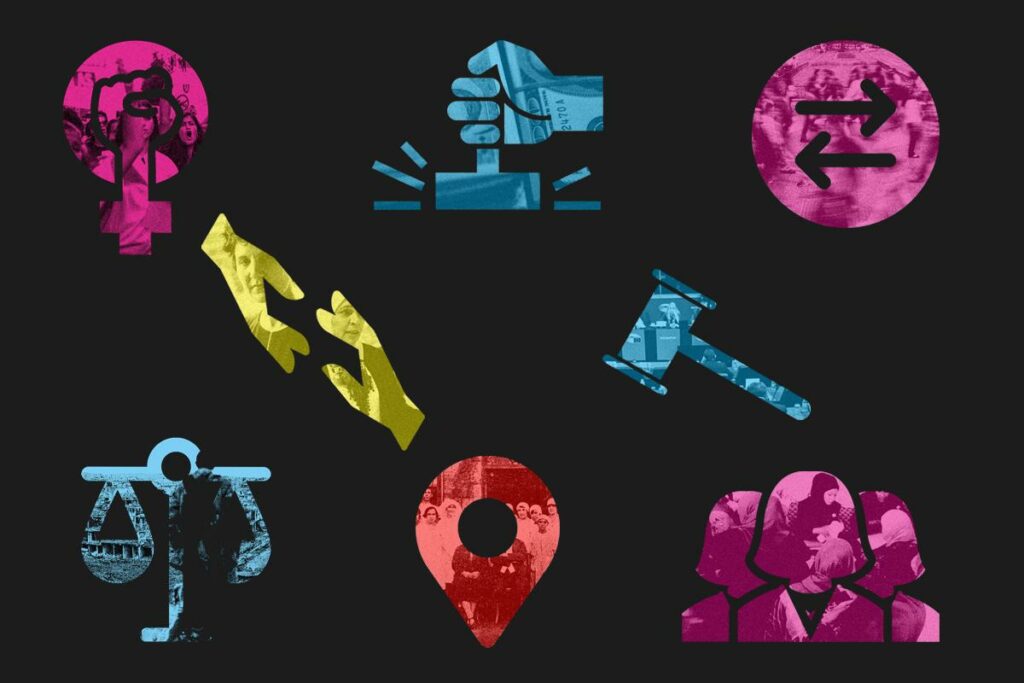 Such battles being fought by civil society are rarely visible to those outside the field. The general public sees only a small slice of the picture, which usually takes place in the context of choosing a side in the “supporter” or “adversary” binary.

The idea for this collection of articles emerged from a discussion between Badael and Al-Jumhuriya about the need to convey to the general public some of the experiences and conversations that occur among civil society actors and within their circles. This came not only from a democratic inclination to strive for the greatest possible degree of openness and transparency, but also from our perception of a dangerous stagnation in public discourse. Amidst our tremendous losses, we find there is a widespread fear of publicizing debates among those actively involved in public affairs—including those who come at the conversation from civil society. In particular, social media is feared as a place where discussions can easily slide into destructive populism. Hence, they prefer to limit discussions and debates to narrow circles that amount to safe spaces where they can avoid being viciously attacked.

In turn, this reality creates an uncomfortable lack of transparency for a segment of the general public that is experiencing the same losses and worsening conditions, and is thus driven to assume the worst—or, in extreme cases, make harsh judgments and accusations of treachery.

This vicious circle results in a frail and unhealthy state of debate in the Syrian public sphere. We understand the complex reasons for the current state of affairs, and have no desire to analyze its causes or those responsible for it. We do believe, however, that opening the largest possible space for collective deliberation, intellectual debate, and political discussion is an urgent necessity. Cultivating such a space, in order to deal with the full range of Syrian public affairs, is perhaps the most important thing we can do in the midst of the generally abysmal conditions, and in the face of our inability to control our own destinies. It is within our power to form an environment of discussion, interaction, debate, and understanding that guarantees a space for effective consensus, respectful argumentation, and the ability to disagree with dignity. Furthermore, we aim through this collection to contribute to filling the void created by the dearth of literature on Syrian civil society penned by active participants and activists directly involved in the work.

As a loose suggestion for how to read the collection, we recommend starting with Dr. Nour Abu-Assab’s piece on defining civil society as a tool of resistance that has arisen, been developed, and remains located within public power structures. Next, we suggest the two articles that deal with feminist affairs. Leen Alabed explores the range of challenges facing feminist and women’s organizations in our unstable circumstances. As for Dr. Nof Nasser-Eddin, she examines problems in feminist work that she sees as a result of institutionalization and feminist movements’ adoption of methodologies belonging to civil society. Her analysis looks at how feminist movements and civil society are affected by the international community and its agendas regarding funding opportunities and policies. In a second section, largely comprising first-hand accounts, we read an interview conducted by Oula Ramadan with Amina Khoulani and Salma Kahale about the relationships between civil society organizations and victims’ groups. This interview focuses on the experiences of Khoulani and Kahale’s intertwined work with the organization Dawlaty and the association Families for Freedom. Majdi Maher takes up Homs as a model of a city under regime control in which local associations and international organizations actively provide useful information on possible openings, limitations, and existing conditions for overtly conducting civil work in regime-controlled areas.

In a third section, which is both analytical and observational, we come to Ibrahim Olabi and Eyad Hamid’s analysis and discussion of civil society organizations and economic sanctions. This section also includes Mohammad Al Abdallah’s analysis of the realities, challenges, and problems of strategic litigation that seeks to prosecute perpetrators of war crimes against Syrians in the available legal domains, particularly in Europe. Although parts of this collection deal with their subject matter from a research and academic point of view, we have prioritized writing by those active in Syrian civil society. We present their diverse specializations and perspectives, and their potentially divergent views and opinions on controversial issues related to Syrian civil society and public affairs as a whole. As such, the analyses and opinions offered by the authors express their personal opinions, and neither necessarily correspond with nor depart from the opinions of the rest of the authors, the editors, or the publishers.

This collection focuses on Syrian civil society organizations that work to attain human rights and change public discourse. It does not address civil humanitarian or relief work, despite the fact that this is one of the main forms of civil society in Syria today. Humanitarian and relief work constitute an active environment with its own distinct concerns and conversations, and require separate and specialized consideration. Similarly, the articles are not concerned with the elephant in civil society’s room: financing and sustainability. This was avoided in order to forestall a fundamental debate about the existence and survival of civil society institutions; a debate we intend to take up at a later time. Instead, we hope to challenge the importance attributed to the question of funding, which causes it to eclipse all other topics. We also hoped to avoid using funding as the entry point for discussing Syrian civil society. There are many further points worth focusing on, analyzing, and discussing that have not been mentioned in these texts. It is our hope that this selection of articles, and the discussions they contain, will be a catalyst for interaction and exchange among civic actors and other interested parties, and encourage their contribution to and participation in public debate.