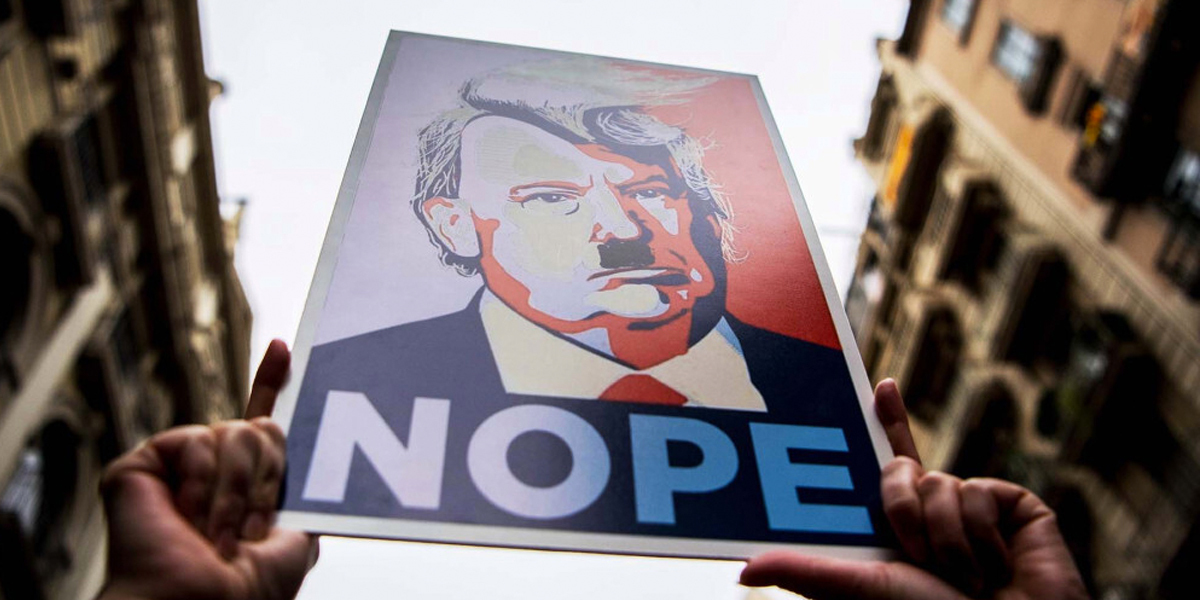 Fascism: A forced regression to patriarchy

Whether in Hitler’s Germany, Putin’s Russia, or Assad’s Syria, fascism is everywhere accompanied by a violent assertion of patriarchy, writes Theo Horesh.

Fascism is a pre-modern reaction to post-modernity. It meets the premature dissolution of social norms with the heavy hand of authoritarianism; the sudden fracturing of settled forms with the illusion of law and order. It meets surrealism with classicism; atonal composition with military marches; and the liberation of women with a return to the kitchen. But while fascism may romanticize the past, what it actually presents is a brutal alternative to rapid social development.

Fascist orders may be patriarchal, but they are far from traditional.

American Republicans chose their most abusive bully and lined up behind him as he broke all social and political norms to tear down perhaps the most powerful woman in the world for a reason. They chanted “Lock her up!” not simply because they viewed her as a criminal, but because they were reasserting their patriarchal right to power.

Patriarchies are generally understood as hierarchical orders dominated by men. Pre-modern societies are typically patriarchal, with males dominating politics and the family. Gender roles are circumscribed and human freedom is limited. With economic development, however, all this tends to change. Development provides the security needed to explore options, fostering expression and the liberation of women. It also tends to foster democracy, which frees individuals from traditional orders.

Stable democracies are rarely patriarchal, but the regression to patriarchy is typical in failed or failing democracies, such as Poland, Russia, Turkey, and Hungary.

Sometimes social development is just too fast, too chaotic, too disorderly, and ultimately doomed to fail. In the aftermath of defeat; in the dislocations of great recessions; at the tail end of an economic miracle, traditions can melt away, making everything seem possible. But it is at just such moments that higher development all too often fractures and fails.

The postmodern movement only appeared after the heyday of fascism. Still, its precursors can be found in the social and artistic innovations of the “roaring twenties,” which saw literary forms dissolved in Joyce’s Ulysses and sexual norms exploded in Margaret Mead’s Coming of Age in Samoa. It saw the emergence of Art Deco and Bauhaus in architecture; the popularization of jazz; and the rise of cinema. Like the postmodernism of the late twentieth century, the erosion of forms accompanying these developments left all too many people feeling unsettled and shaky, as if walking along a slippery slope at too high an altitude.

The artistic and intellectual innovations of the early twentieth century can make those of the early twenty-first appear unimaginative and conventional. Yet innovation by itself is not enough to sustain freedom. True freedom takes work to sustain, and is everywhere reliant upon settled institutions, like freedom of speech and assembly, the rule of law, and the right to vote. These were unstable in Italy and Germany following the First World War, as they were in Russia at the turn of the millennium, and are in Central Europe today. Where democratic institutions are unstable, freedom tends to be suspect; where accompanied by widespread disorder, a visceral appeal to tradition often emerges to shut it all down. With the past exploded and social progress unsustainable, those inclined to fascism have nowhere to turn but a re-imagined past, decked out with all the paraphernalia of the future from which they run for their lives.

Fascism cannot be properly understood without some consideration of this reversion to patriarchy. Eugen Weber has written that fascism always emerges in response to the rising power of women. The Nazis entered office after a long decade of democracy in which women gained the vote and children won legal protection. The patriarchal family broke down in Weimar Germany, amid an open gay scene in Berlin, and a flourishing of the experimental arts, to which the Nazis responded with a dominant father-of-the-nation, who sought to re-establish patriarchy.

A similar reversion to patriarchy could be witnessed in Russia following the failed flirtation with democracy in the 1990s. The Russian journalist Masha Gessen has documented the rise and fall of a thriving gay rights movement, which quickly emerged after the fall of the Soviet Union. Yet a decade of corruption and economic dislocation led the nation to seek security in a strongman, who would recriminalize homosexuality, initiating a homophobic campaign that would see gays and lesbians terrorized by gangs of young men, and scapegoated for Russia’s social failures, even as the new leader struck his own homoerotic poses of a muscle-bound warrior.

The US may now be on the cusp of similar developments. Women are continuing the slow decades-long rise in the workplace. A younger generation of women is increasingly assertive and confident of its ability to succeed. The movement to end sexual harassment is overturning workplace norms. Gays and lesbians are coming out of the closet; gay marriage has been institutionalized; the transgender rights movement is bringing the scrutiny of gender itself—long an academic and feminist preoccupation—into mainstream debate. Conservatives have reacted with a backlash, reviving a virulent form of patriarchy, which sanctions unrestrained masculine impulses and the denigration of women by powerful men.

Whether the reason lies in biology or cultural conditioning, men tend to locate themselves in hierarchies of other men. Conditioned to find their place, they typically maneuver through such hierarchies with alacrity, thus faring better than women in more hierarchical societies. Most try to hold their own in the pecking order, but “alphas” aim for the top, and fascists attempt to overturn traditional hierarchies altogether, setting up their own alternative orders, behind which their followers might line up. These newer orders tend to be punishingly vertical, as in the case of the Republican Party, where stepping out of line now ends careers—for their principal organizing mechanism is the ability to bully others.

The bullying has perhaps been most extreme in recent years in Syria, where the genocidal aggression through which it has been expressed is stunning. Prior to the revolution, gangs of beefy young men on hormones, working closely with the Assad regime, terrorized the population, extorting money and services. As the revolution got underway, these same shabbiha, or “ghosts” as they were called, began carrying out the worst atrocities, mopping up after the formal military left the scene. Significantly, these atrocities included extensive sexual and gender-based violence against women and girls, as well as boys and adult men. Meanwhile, the regime carried out a sadistic regimen of torture that would ultimately result in tens of thousands of its opponents’ deaths, at the very least—all in an effort to beat down the opposition with fear.

Fascists do not try to prettify their actions, but rather use them to hammer liberals and minorities into submission, for domination is essential to cowing the opposition and assimilating the weak. Women are vulnerable to this kind of intimidation, for they are seldom as well-schooled in the arts of oppression as men, and are typically more vulnerable to physical attack. But patriarchy is oppressive to men as well, for it places them in a straitjacket, which starves them of emotional expression. The early twentieth-century social psychologist Wilhelm Reich believed fascists relied on this kind of sexual and emotional repression to foster a masculine aggression that could be directed against outsiders. Whatever its purpose, it is bound to pervert male psychosocial development.

American Republicans have long sought to re-establish a traditional order that puts women back in the kitchen, but Trumpist fascism represents a more visceral form of domination. Studies have shown that, while support for previous Republican presidential candidates such as Mitt Romney and the late John McCain was loosely correlated with more chivalrous views of traditional gender roles, support for Trump is correlated with outright hostility toward women. The barrage of administrative decrees that has characterized this administration has sent an ominous message that he would hold nothing back. It has been much the same across the Middle East, ever since the backlash against the Arab Spring began.

The resistance to fascism can thus take place in the workplace and family, on the streets, and in the halls of government. Fascism can be resisted wherever the forces of hierarchy and the power of strongmen might be thrust aside—or outright disobeyed. And it can be resisted in our own hearts, where the urge to dominate finds its source, and the vision of equality might begin to flourish. Meanwhile, the forced regression to patriarchy may prosper for some time, but the force that lies behind it sows the seeds of its own destruction.

Theo Horesh is a human rights advocate who has written widely on genocide, climate change, fascism, and democracy. He is the author of four books on the psychosocial dynamics of globalization, including The Holocausts We All Deny, and, most recently, The Fascism This Time: And the Global Future of Democracy. He is currently completing a PhD at the University of Leeds, focused on cosmopolitan ethics.

Theo Horesh Theo Horesh is a human rights advocate who has written widely on genocide, climate change, fascism, and democracy. He is the author of four books on the psychosocial dynamics of globalization, including The Holocausts We All Deny, and, most recently, The Fascism This Time: And the Global Future of Democracy. He is currently completing a PhD at the University of Leeds, focused on cosmopolitan ethics.