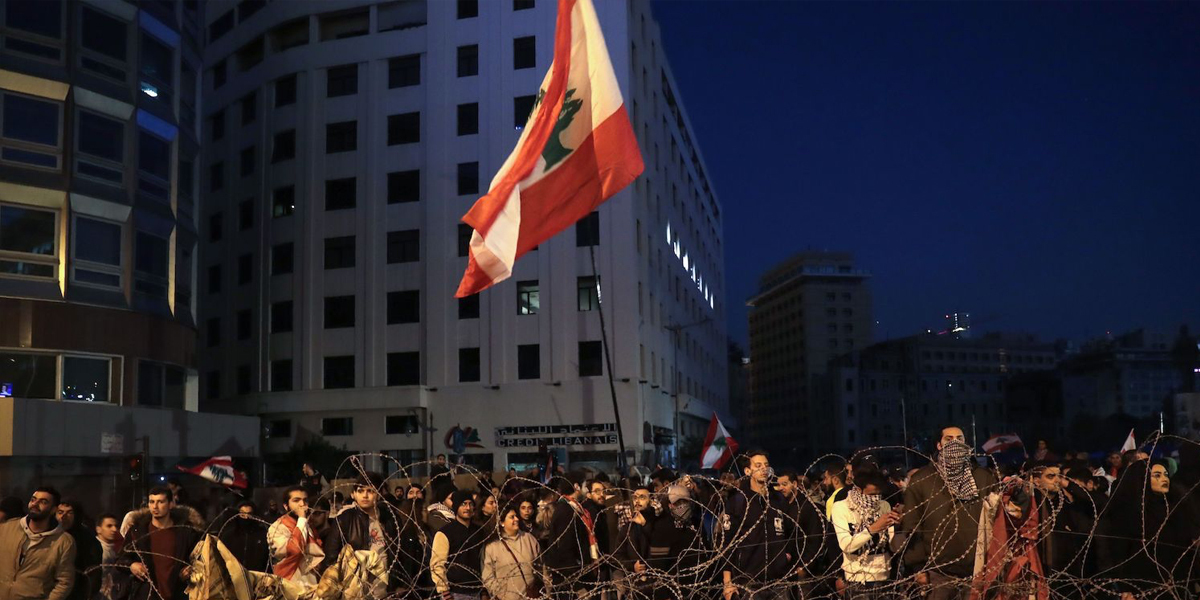 One year on, a path forward for Lebanon’s uprising

One year on from its uprising, with much of Beirut in ruins, Lebanon is in the depths of despair. Yet a way forward out the abyss remains possible.

As the French President Emmanuel Macron strolled down a Beirut street named after the first French High Commissioner in Syria and Lebanon, Gen. Henri Gouraud, two months ago—one century almost to the day since the same Gouraud decreed the very creation of French-occupied “Greater Lebanon”—a petition calling for the return of French colonial rule in Lebanon gathered over 60,000 signatures. So rife did talk of this once-unthinkable notion suddenly become that Macron—addressing reporters later the same day from Gouraud’s former residence—found it necessary to explicitly rule it out. If that weren’t enough to make one suspect one had time-traveled back to the early twentieth century, an article then appeared in Foreign Policy under the title, “Partition Is the Only Solution to Lebanon’s Woes.”

Strong as the temptation may be to ridicule proposals of this kind, they deserve to be taken seriously—not in and of themselves, but as manifestations of the extremity of despair into which the country has now sunk, one year on from the uprising that began on 17 October, 2019, which seemed for a moment to promise the real possibility of a new dawn. Rather than the competent, honest, and accountable governance so many Lebanese hoped their thawra (“revolt,” or “revolution”) might usher in, they have instead received an economic and financial meltdown, a collapsed currency, and a full-blown social and humanitarian crisis, all presided over by exactly the same war criminals and kleptocrats, who have shown no inclination to change anything apart from the tactics by which they cling to power and plunder the nation’s resources.

And that was all before the apocalyptic explosion at Beirut’s port on 4 August, which killed over 190; wounded more than 6,500; displaced some 300,000; and left entire swathes of the city mangled in wreckage that has scarcely begun to be cleared more than two months later. An extraordinarily oppressive gloom has descended upon the capital in the aftermath of that massacre, plunging spirits to depths unknown since the civil war. The sense of a country literally falling apart is inescapable. Mysterious fires and explosions erupt almost daily; four were killed by one just last Friday. Pharmacies run out of vital medications. Gas stations ration the fuel available per vehicle, ahead of an anticipated end to government fuel subsidies, which could see pump prices quadruple. My local supermarket—supposedly one of the best—had neither eggs nor chicken breasts when I last visited on Monday. Each day brings news of fresh departures: by plane, for those capable of it, or else aboard the “death boats” to Cyprus; a journey which recently took the lives of six, including a two-year-old boy, Sufian, and a three-year-old, Muhammad.

It should be no surprise at all then, in such conditions, that minds grow more receptive to ideas that would otherwise be dismissed as outlandish, or downright mad. Nothing else has worked, after all: not the “March 14” movement born after the 2005 Cedar Revolution; nor the “You Stink” protests sparked by the waste disposal crisis of 2015; nor the “Beirut Madinati” campaign in the 2016 municipal elections; nor the “Kollouna Watani” coalition in the 2018 parliamentary elections. The thawra, too, has failed in the narrow sense of its stated goal of “toppling the regime” (whatever that meant to begin with), even if it has also accomplished more than its obituarists tend to acknowledge. If one thing above all explains the profound melancholy in Lebanese civil society circles today, it is the widespread loss of conviction that any available course of action will yield results. Writing in al-Modon Wednesday, the journalist Yara Nahle gave eloquent expression to the sentiment: “Admitting our weakness and impotence is not a surrender to despair, but a necessary realism in a world that grows ever bleaker, in which there is no place for flowery dreams.”

Yet a path forward does still exist; no dreams or flowers required. We’re almost in 2021, which is only one year away from the next scheduled parliamentary elections. As this author noted in these pages one week after the thawra erupted, Lebanon’s parliament—being the body that elects the president and parliament speaker, and with them the prime minister—is the sole constitutional, democratic, and peaceful means of booting out the present political class. There can be no higher priority today, for anyone aspiring to change in Lebanon, than preparing for the 2022 elections. Many, of course, already know this, and have taken tentative first steps towards organizing, but the initiatives remain embryonic, and seem peculiarly hesitant. Time is already scarce, for the challenges are colossal, going well beyond the usual concerns of fundraising, selecting candidates, and campaigning. They include crucial auxiliary battles, such as the fight for a new, fairer electoral law, and ensuring the elections happen at all—hardly a given, after the five-year postponement of the 2013 elections, at a time when the threat to the ruling clique was incomparably milder. All the more reason to begin work right away.

One hears often about “hope” these days in Lebanon. Is there “hope”? Do you, or I, have “hope” for Lebanon? It’s a pointless question, because change comes not from hope, but action. To hope is to wait passively for someone else to do the work, and the Lebanon sought by 17 October’s demonstrators certainly won’t be gifted to them by Macron, Trump, Putin, or Muhammad bin Salman, to say nothing of Bashar al-Assad or Ali Khamenei. Nor are tired clichés about immortal phoenixes or the longevity of the cedar tree helpful on this occasion. Far better than blind hope is the hard evidence that such work does pay off, for which one need look no further than last week’s student elections at the Lebanese American University, where independents defeated the mainstream parties outright, winning every seat they contested without exception. Outside campus walls, independents have also recently taken the Beirut Bar Association, and half of the engineers’ and architects’ syndicate in northern Lebanon. “Frustration is not destiny,” wrote the late Samir Kassir—and neither is it a policy. There are just over 500 days to go until the elections. Nothing less than the survival of the country depends on putting them to use.

[Editor’s note: This article is also available in Arabic.]