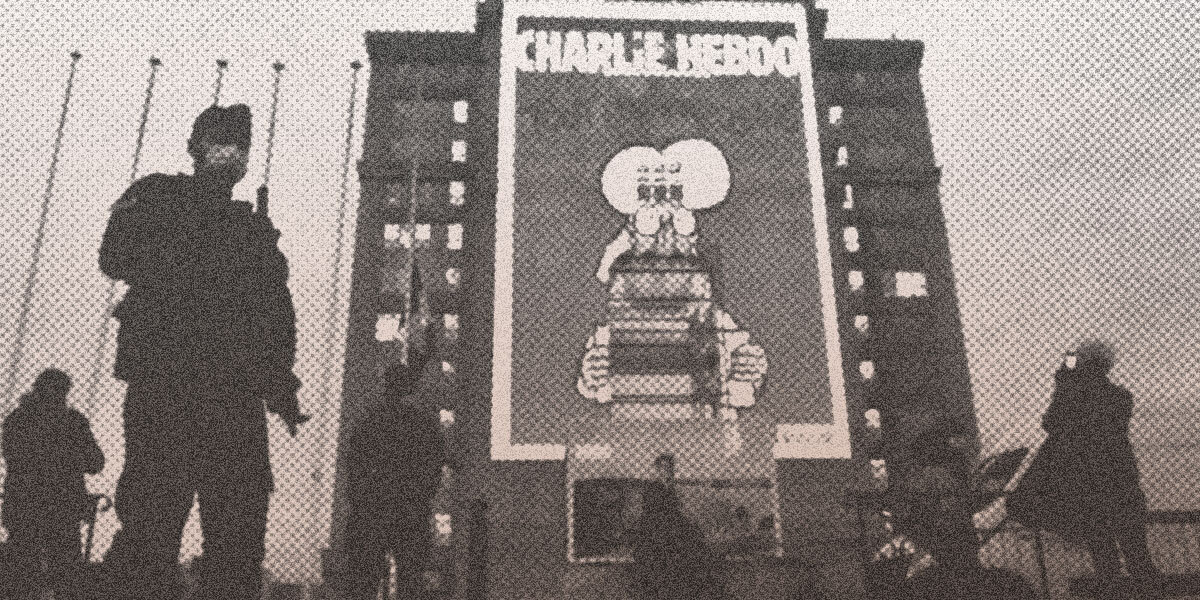 On the crisis of Islam: In defense of discussion

President Macron isn’t wrong to say Islam is in “crisis,” but the crisis cannot be separated from the tyranny and violence inflicted on Syria, Iraq, and elsewhere in recent years, argue Farouk Mardam Bey, Ziad Majed, and Yassin al-Haj Saleh.

[Editor’s note: This article is one of two published by Al-Jumhuriya English today on the “crisis of Islam;” the second is a rejoinder by Abdul-Wahab Kayyali, titled, “On the crisis of Islam: Muslims and the question of equality.” An Arabic version of this article may be read here, while a French version was published in Le Monde.]

The murder last month of the French history teacher Samuel Paty, with its atrocious symbolism, marks the latest in a series of terrorist acts perpetrated by young French Muslims, or other Muslims residing in France. As is often the case, it has inflamed emotions to the extreme, rendering it impossible for days or even weeks thereafter to have a reasonable conversation about Islam and related questions.

As secular, democratic intellectuals, descending from the Arab Levant, and from a heritage of which Islam was and is an essential component, we are compelled by this state of affairs to affirm—first of all—that communication between different people, and the thorny examination of complex issues, are the key to disarming the militarization of thought and culture advocated by Islamist nihilists such as Paty’s killer, Abdullah Anzorov, and the many others like him. The more such people succeed in deepening the trenches separating Muslim communities from the world around them, the more they prosper and flourish.

Second, we affirm that this militarization of thought and culture is not limited to these Islamist nihilists alone. Plenty in the West play the very same game, and encourage the Islamists themselves to play it further, for they too seek to deepen the trenches and live in buttressed fortresses, indifferent to all that goes on around them and out on the margins of their settlements.

We regret to say we perceive a hatred for the world; our shared world; and for the values of justice, tolerance, and equality, on the rise in more than one place today: in the Muslim worlds, as in American and European societies, to say nothing of Russia, India, China, Brazil, and elsewhere. This at a time when the establishment of a global community of solidarity would be the most effective way to deal with problems for which there are no local solutions, such as the environment, climate change, pandemics, famine, and migration.

The world today, in all its vastness, diversity, and unity, represents the public interest of humankind. It is in a deep crisis: a crisis of directionlessness, and a lack of purpose drawing people together. Muslims and their religion are parts of this world; they are present in it, as it is present in them. The French president is not wrong to say Islam is in crisis; Muslim intellectuals themselves have been saying so for generations. What he neglected to add, however, was that the entire world is in crisis, and that the crisis of Islam—embodied in the rise of a violent nihilism that loathes the world—is exacerbated by the growth of the populist, nationalist, extremist, and racist currents all around, which appear no more concerned about this world than the Islamist nihilists.

That the victim, Paty, was a history teacher prompts us to recall the history of this Islamist nihilism responsible for the crime. In its violent manifestation, it was born in Afghanistan in the early 1980s, when the United States sought to turn that poor country into a Vietnam for the Soviet Union that had invaded and occupied it, only a few years after the Americans’ own Vietnam. At the time, US and Pakistani intelligence services joined forces with Saudi Arabian money and the doctrine of Wahhabism—a puritanical form of Salafist Sunni Islam that had until that time been confined to the Saudi Kingdom—in order to attract, train, and equip young men from all over the world to carry out violence and warfare.

As this was going on, the Islamic Republic of Iran, established in the wake of the 1979 revolution, was exporting its own totalitarian ideology to oppressed communities across the Middle East, clashing in more than one place with Tehran’s regional and international rivals, thus encouraging the growth of Shiite fundamentalism in parallel with its Sunni Salafist counterpart. Later, the 2003 invasion and occupation of Iraq on the false pretexts of Saddam Hussein retaining weapons of mass destruction and having organizational ties to al-Qaeda, which had carried out its iconic terror attack on the US two years previously, offered fertile soil for the revival of nihilist jihadism. An occupied Iraq, with its infrastructure devastated and its society in pieces after Saddam’s tyranny and endless wars had torn apart its social fabric, constituted an ideal environment for attracting such characters. A decade later, the situation would worsen further with the destruction of Syrian society at the hands of the Assad regime; with the help of its Iranian and Russian allies; leading ultimately to the proclamation of ISIS’s “Islamic State” spanning the smoking ruins of both Syria and Iraq.

In its political and martial forms, Islamist nihilism makes an appearance whenever political systems are shut down, and societies are stripped of politics and control of their own existence. If religion is the soul of soulless conditions, as Marx put it, then in the contemporary Islamic context it is the politics of apolitical conditions. In other words, political impoverishment goes hand-in-hand with Islamism; more of the former means more of the latter. By the same token, ownership of politics by the population; along with the rights to organize, speak, and protest; are the ideal means of confronting Islamist nihilism and its loathing of the world.

Instead, what has happened for decades and continues to happen to this day in the Middle East is precisely the opposite. Since the 1990s, and especially since 9/11, the world’s most influential forces have diagnosed terrorism as the paramount political evil. This has led to a global securitization of politics; a reliance on murderous torture regimes; and a weakening of democracy and the rule of law; the benefits of all of which we reap today. Two decades into the “War on Terror,” the world is now less secure; collective hatreds have been strengthened; and the War has neither allowed calls for justice, nor created any local or international tribunals to offer redress to the victims of terrorism in such countries as Syria, Iraq, and elsewhere. Justice has been the preserve of certain Western victims, usually taking the form of revenge killings carried out by commandos, fighter jets, or drones, whereby the West has quite literally been judge, jury, and executioner.

In truth, the ostensible War on Terror is no war at all. It is torture, which is why it should come as no surprise to find Assad’s torture state among its partners, along with the regime of Egypt’s Abd al-Fattah al-Sisi; and the Myanmar government—implicated in genocide against the Muslim Rohingya people—and the sectarian, nationalist Modi government in India. Nor should it seem strange that the Chinese regime should place one million Muslims in “rehabilitation” camps reminiscent of the Stalinist and Pol Pot traditions; or that former “terrorists” launder their reputations by engaging in this “War” against Islamist terrorism; or that the Israeli colonial occupation and apartheid regime in the Palestinian territories should seek shelter under the same slogan of fighting terrorism. There is no murderer, corrupt ruler, or aggressor who cannot be welcomed back into the fold so long as they partner with the West in its War on Terror—and so long as Terror means only the Islamist variant.

Like opposing sides of the same coin, Islam faces two major interrelated issues in today’s world. The first is Islamist nihilism, which has raised the level of cruelty within brutalized Muslim societies and across the world as a whole. The second is bigotry against Muslims in its various forms and degrees. A world without direction and purpose cannot see one side of this coin without ignoring the other, exactly as the Islamists themselves do. This heralds a future of yet more brutality to come. Islamophobia, or the anti-Muslim bigotry rooted in a lengthy history of conquest and colonialism, is of no help in confronting Islamist nihilism. Nor is Islamic nihilism—an essentially elitist movement unrepresentative of the majority of Muslims—of any help in confronting Islamophobia. On the contrary, Islamist nihilists are entirely at ease in environments of discrimination against Muslims. They need the senses of grievance and victimhood, because they have nothing positive to offer the world.

It is not too late for clearer and more radical thinking that presents the Islamic question and crisis as one facet of a global crisis; a crisis which grows less curable the longer its treatment is delayed. We call on our colleagues and counterparts in France, Europe, the West, and the world at large to reflect on the crisis of a world without alternatives or direction; without prospects or hope; and to work on creating a principle of global responsibility that resists racist exclusivity and claims of ethnic or religious superiority.

We have no wish to be bearers of bad news, but the dangers presently facing the world give us no reason to dismiss the possibility of worse to come. We hope—in order for that possibility to be forestalled—that others shall not dismiss it either. As we have reason to know, “worse” does not tell anyone before it arrives.

Ziad Majed Dr. Ziad Majed is an Associate Professor of Middle Eastern Studies at the American University of Paris, and the author books including Syria: The Orphaned Revolution (2013). He is @ziadmajed on Twitter.