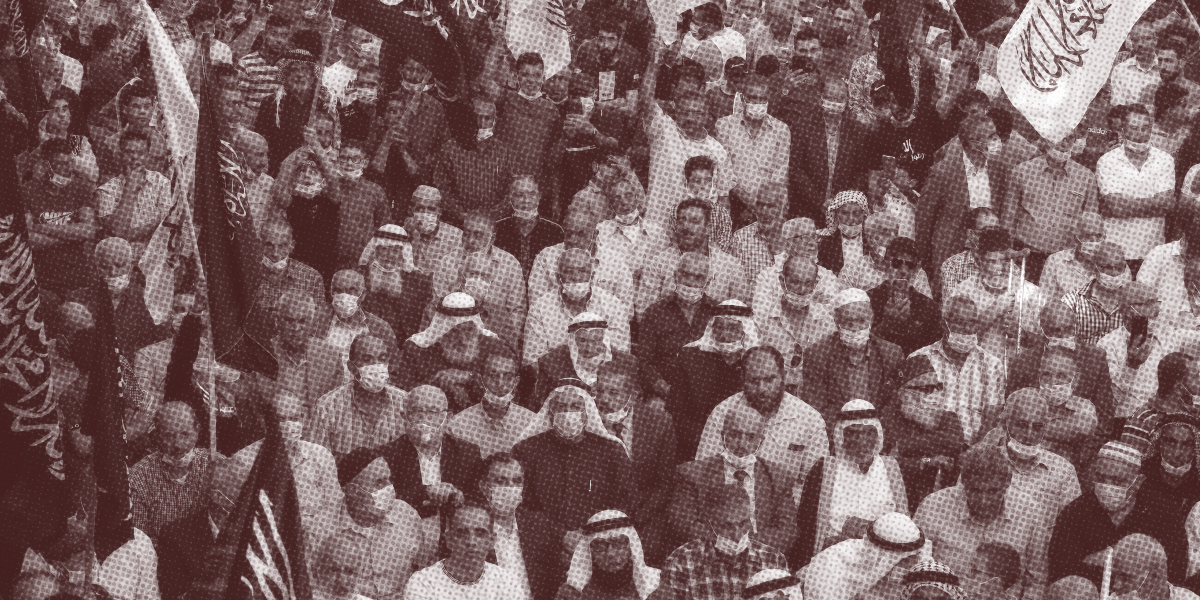 On the crisis of Islam: Muslims and the question of equality

The “crisis of Islam” lies not only in the violent extremist minority, but in a more widespread rejection by mainstream Muslims of the principles of equality, tolerance, and free expression, argues Abdul-Wahab Kayyali in response to Farouk Mardam Bey, Ziad Majed, and Yassin al-Haj Saleh.

[Editor’s note: This article is a response to “On the crisis of Islam: In defense of discussion,” by Farouk Mardam Bey, Ziad Majed, and Yassin al-Haj Saleh, also published today by Al-Jumhuriya English. An Arabic version may be read here.]

In their article, “On the crisis of Islam: In defense of discussion,” Farouk Mardam Bey, Ziad Majed, and Yassin al-Haj Saleh argue that the murder last month of the French history teacher Samuel Paty by Abdullah Anzorov laid a trap for European politicians, in which they fell by virtue of their impulsive reactions and inflammatory statements. The authors defend the right to calmly deliberate the issue at hand, without sliding into the usual polarizations, and to provide a diagnosis of a global situation that produces phenomena such as Anzorov: Islamist nihilism versus the Islamophobic nihilism of the so-called “War on Terror.” The solution to this malaise, the authors say, must be neither local nor compartmental, and global leaders need to look at both nihilisms as a package. The authors ask that intellectuals and thinkers around the world approach the problem with a universal lens, to transcend both nihilisms and mitigate their effects through a “global community of solidarity.”

As someone who is both personally and intellectually indebted to the authors, I have no quarrel with this diagnosis per se. However, I’m not persuaded that it pertains to the “Islamic crisis” of which French President Emmanuel Macron and others (both Muslims and non-Muslims) have spoken. The crisis of Islam today is not one of a nihilism that has emerged and prospered in the closed spaces of the region’s politically-repressive regimes, only to be reinforced by an equal and opposite nihilism of racist and fascist currents around the world. A vast majority of Muslims today reject this Islamist nihilism, condemn its practices, and do not believe that it accurately represents their faith. At the same time, a vast majority also equates beheadings with the publication of offensive cartoons and global leaders’ statements about an “Islamic crisis”—thereby adopting a unique moral standard which would appear totally out of step with the rest of the world’s ethics. I thus see the “Islamic crisis” that we ought to discuss today not as that of the nihilist extremist minority, but rather that of the mainstream that constitutes majorities in Muslim societies today. It is this crisis which I believe the authors overlooked: the crisis of the Muslim majority.

Perhaps it is useful to recount the proceedings that led to this latest cycle of global hysteria. In his high school course on freedom of expression, Samuel Paty wanted to display a set of illustrations published by the French magazine Charlie Hebdo that depict the Prophet Muhammad in an offensive manner. He wished to do so not necessarily because he shared the ideas of the illustrators, but because like any (good) teacher he wanted to expose his students to controversial material that challenged their beliefs and took them outside their comfort zones, in order to discuss and analyze this material. Paty had in fact offered Muslim students the opportunity to leave the classroom in advance if they thought the illustrations might offend them, in a form of “trigger warning” demonstrating a keen sensitivity to their beliefs. Nonetheless, one student (who Paty later claimed was not actually in attendance) reported Paty to her father, who filed a complaint with the school as well as the police, accusing Paty of spreading “pornographic pictures”—to which Paty responded by filing a defamation complaint. The father attempted to rally other parents against the teacher, and a group of them sought to have him suspended. Though their attempts failed, the incitement led Paty’s name to circulate among Paris’ suburban Muslim community as an “enemy of the religion.” That incitement led to Anzorov’s crime.

In all likelihood, the angry parents did not wish for Paty to be killed, and they most probably belonged to the non-nihilistic mainstream Muslim majority. But what did they want? That their religion—unlike all others—should be exempt from ridicule and scrutiny in the classroom? As for the majority of the global Muslim community—those taking part in the campaign to boycott French goods; who decry Macron’s political gamesmanship and exploitation of the event; and who condemn mockery of the Prophet—what do they want? That their faith and beliefs be exempt from the freedom of expression (including mockery and ridicule) that French law guarantees its citizens the right to practice? Why do Muslims believe they deserve these exemptions and privileges? Why are they asking for censorship and a restriction of the public sphere in a country that enshrines the right to both belief and non-belief?

The global Muslim community’s hysterical reactions to the killing of Paty—which entailed a moral equivalence between an act of murder, on the one hand, and, on the other, Macron’s opportunistic statements, and the contemporary facts of French racism, and so on—have grave connotations, and pose difficult questions for today’s Muslims. Most Muslims are not nihilistic, and yet exhibit an alarming comfort with Islamist nihilism; are largely apologetic towards it; and equate it with other behaviors that—heinous though they may be—are simply incomparable (equating murder with the drawing of cartoons being perhaps the most obvious example). Muslims display a crude selectivity when it comes to the things that provoke their outrage and lead to global condemnation and boycott campaigns on the scale recently witnessed.

Neither the Islamic State’s crimes against Muslims (never mind non-Muslims), nor Bashar al-Assad’s and Russia’s crimes against Muslims (never mind non-Muslims), nor the Chinese regime’s crimes against Muslims, led to global public campaigns of condemnation and boycott on a scale near the one provoked by Macron’s recent statements. Nor has a single leader of a Muslim-majority country condemned the practices of the Chinese government against Muslims in Xinjiang province, which amount to genocide (the exception being Turkish President Recep Tayyip Erdoğan, who soon backtracked). In asking that their faith and beliefs be exempt from the ridicule and contempt that other religions may face, mainstream Muslims display a sense of entitlement, exception, and privilege in a world that actively seeks to ostracize them and from which they in turn seek actively to disengage.

Reading the article by Mardam Bey et al., one might conclude that Muslims’ problem today lies in the closed public spheres within their home countries. I would argue, by contrast, that Islam’s crisis consists in a sizeable proportion of the Muslim community—which may well constitute the mainstream Muslim majority—who struggle with the concept of equality, in their home countries and elsewhere, and in both open and closed public spheres alike. This same crisis can be observed in widely differing Muslim communities of various socioeconomic and development levels, in which living conditions differ considerably. Muslims adopt both superiority and victimhood narratives (about which Yassin al-Haj Saleh has written extensively) that play a formative role in constructing the Muslim community. The adoption of these narratives causes a fundamental problem for mainstream Muslims with regards to the concept of equality, in societies where they constitute majorities no less than where they are minorities. In most Muslim-majority countries, the law criminalizes even mild criticism of the faith (to say nothing of ridiculing it), as well as other public behavior that “provokes” Muslims, to the extent that in several Muslim countries it is against the law to be seen not fasting in public during the month of Ramadan; even for non-Muslims. These laws impinge on the rights and freedoms of non-Muslims in ways that do not seem to concern mainstream Muslims at all. Even if we submit that this is because these countries are ruled by brutish tyrannical regimes which restrict the public sphere, the situation is similar in other countries where Muslims are minorities and society is more open (e.g., in Europe). There, mainstream Muslim communities demand exceptions and privileges and restrictions on the public sphere, rather than equality and citizenship. The popularity of President Erdoğan; by far the most celebrated contemporary Muslim leader today among Muslim communities in both Muslim and non-Muslim countries alike; illustrates this point. Erdoğan’s supporters overlook his authoritarian tendencies and his persecution of political and ethnic minorities in Turkey, to say nothing of his colonial practices in Syria, and believe him to be a positive representative of the global Muslim nation as he revives Islam’s imperial past and seeks to reconstitute its narrative of hegemony. Erdoğan is not a representative of Islamist nihilism, but of broad segments, at the very least—and in some cases overwhelming majorities—of mainstream Muslim communities all over the world.

Islam’s preeminent crisis is thus not merely a clear reflection of the world’s bleak geostrategic order, as the authors argue, in which Muslim communities are exposed to political and security abuses. Nor is the Imperial West, which reinforces Islamist nihilism, the largest or most important agent in this crisis. In both open and restricted public spheres; free and less-free societies; with high and low development indicators; mainstream Muslim communities refuse on principle to be equal with members of other faiths (Abrahamic or otherwise), and particularly with those of no faith at all. The global Muslim community’s narcissistic wound that was inflamed by the Samuel Paty affair, which continues to reinforce Muslim exceptionalism and privilege, points towards a deep cultural problem that prevents Muslims from engaging with their present era and demanding equal rights with the world’s other peoples. In any conflict, the weaker party lacks the luxury to demand privileges and exceptions; the most they can hope for is parity with the more powerful party. No European or global leader is going to help address this cultural problem with equality; the burden falls squarely on Muslim leaders and societies alone. The current hysteria will die down eventually, but the question of equality will remain unanswered by mainstream Muslims. As secular democrats who have unequivocally demanded the rights of Muslims and non-Muslims alike to a dignified life and political agency in our countries, we must continue to press that question. Muslims are entitled to demand equality, but—like everyone else—may not demand special exceptions and privileges.

We had hoped for the Arab Spring revolutions of 2011 to succeed, for they might have brought about more open public spheres in which this debate could be waged. Now that these revolutions have been crushed, and the public domain is increasingly restricted, and authorities increasingly brutish, it is even more important to wage this debate here and now. There is no alternative.