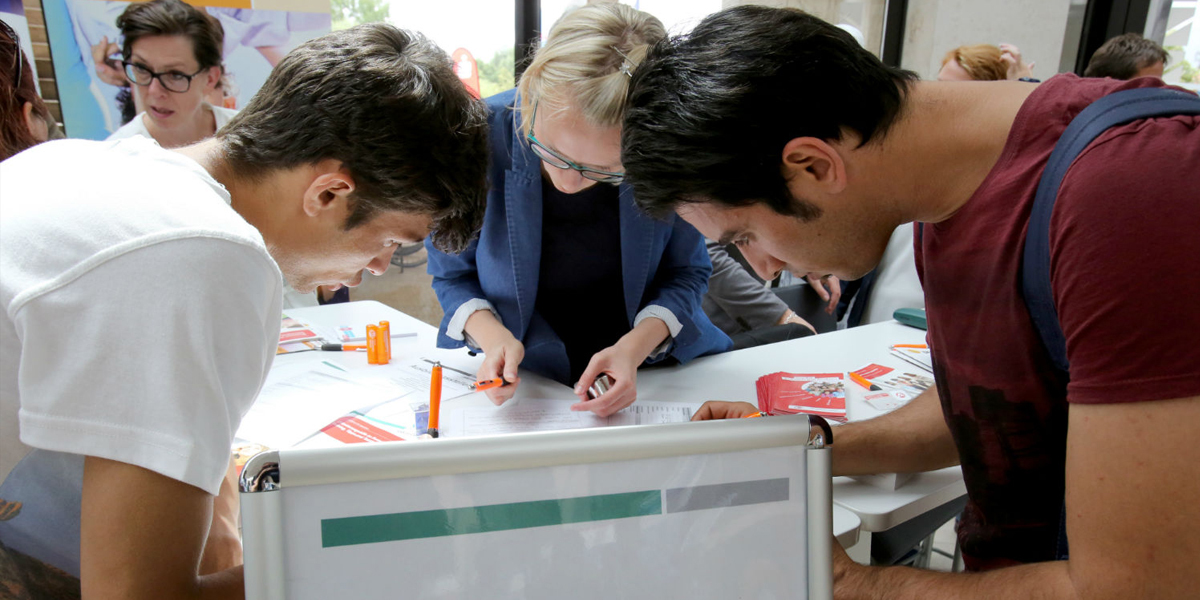 In a short space of time, Syrian refugees have successfully begun integrating into the German labor market. The Coronavirus pandemic, however, threatens to set this process back significantly.

After the outbreak of the Syrian revolution in 2011 and the brutal civil war that followed, a large proportion of the Syrian population was forced to flee the country. According to the UN Refugee Agency (UNHCR), there are currently more than 6 million Syrian refugees and asylum seekers spread across Jordan, Lebanon, Turkey, Germany, Sweden, and over 100 other countries worldwide. Of the myriad challenges faced by these refugees in their new countries, economic integration is among the most difficult. This is especially true in places with wholly new cultures, languages, and systems.

Germany has become a major European destination for Syrian refugees. Between 2015 and 2016, over 430,000 Syrian refugees applied for asylum in Germany, representing 35% of total asylum applications. Accordingly, since 2015, Germany has developed numerous measures and programs to facilitate and accelerate the integration process. Little is known so far, however, about the integration of Syrian refugees into the German labor market; even less is known about the impact of the recent Coronavirus crisis on this integration. This report reviews the integration of Syrian refugees into the German labor market, on the basis of the new IAB-BAMF-SOEP Refugee Sample data setIAB-BAMF-SOEP-Survey-of Refugees, conducted by The Institute for Employment Research (IAB), The Research Centre on Migration, Integration and Asylum of the Federal Office for Migration and Refugees (BAMF-FZ), and German Institute for Economic Research (DIW Berlin)., as well as the latest figures from the Federal Employment Agency (BA).

Prior to the outbreak of Syria’s civil war, the presence of Syrian nationals in Germany was relatively small; no more than around 30,000 people. Once Germany became the main European destination for Syrian refugees after 2011, this number rose sharply, reaching almost 790,000 by 2020. Syrians now comprise the third-largest group of foreign nationals in Germany. Applying for asylum has been the most common way for Syrians to enter Germany in recent years. Between 2013 and 2017, the number of Syrian asylum seekers was significantly higher than ever before, reaching a peak in 2016 with 266,250 first-time applicants.

The demographic characteristics of Syrian refugees do not differ significantly from those of other refugee groups in Germany. Females make up about 35%. Those aged 35 or lower represent 64% of the total. Syrian refugees are thus predominantly male and young.

The spatial distribution of Syrian nationals across Germany’s federal states demonstrates a clear tendency to settle in western Germany. In 2019, almost 60% of Syrian nationals were registered in four German federal states (North Rhine-Westphalia, Lower Saxony, Baden-Wuerttemberg, and Bavaria). This fact may be attributed to the better economic and labor market conditions in those four states, as well as to the historic existence of previous migrant groups, especially from Lebanon, Morocco, and Turkey.

The education level of Syrian refugees in Germany is significantly higher than the average in Syria. The proportion of refugees between the ages of 17 and 64 with upper-high-school certificates or higher qualifications is around 48%, compared to just 22% inside Syria as of 2010, according to the Syrian central bureau of statistics. However, there is also a significant education gap compared to the German-born population, in particular with regard to vocational training. Only 4.5% of adult Syrian refugees have completed school or technical school with vocational training, compared to 59.5% of the German-born population. There are also qualitative differences with the schools in Germany, in addition to formal differences by school type or school year, depending on the level of development and the education system in Syria. These differences must be kept in mind when comparing school certificates or school attendance for Syrian refugees. In addition, the differences in vocational education are primarily due to the fact that Syria does not have an education system comparable to the German dual vocational training system. Many Syrian refugees have thus acquired vocational qualifications through “training on the job.” 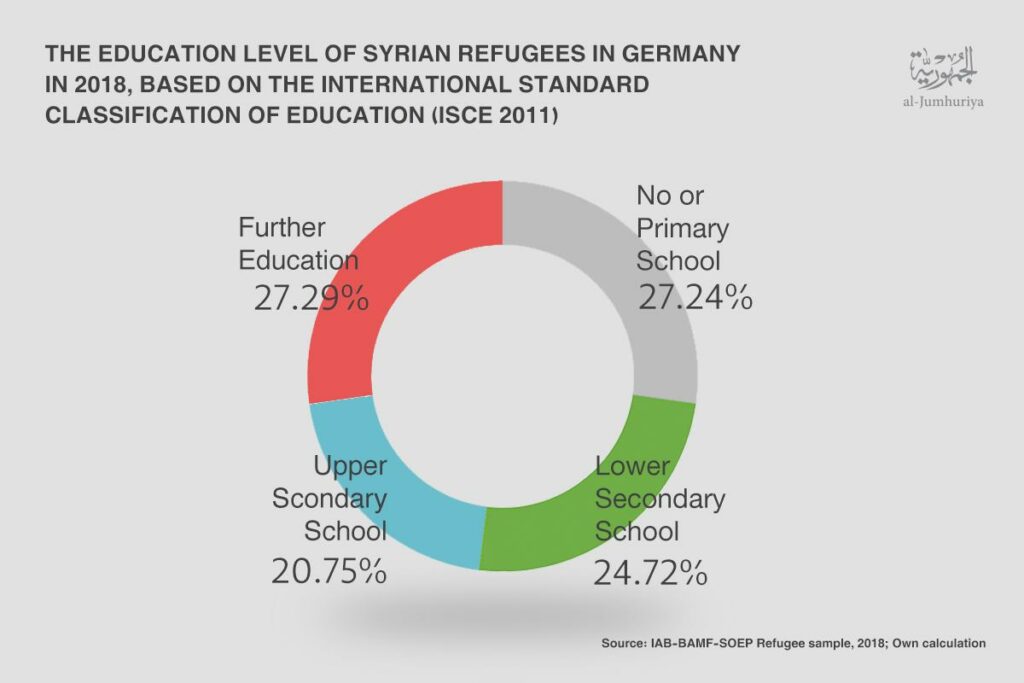 Taking the age group between 17 and 25, approximately 27% of the Syrian refugees now living in Germany have attended a general education school; vocational training institution; college; or university, or participated in vocational training in the second half of 2018. Their insufficient language skills and failure to meet the general educational admission requirements, as well as financial pressures, form the major obstacles preventing young Syrian refugees from participating in the German education system. 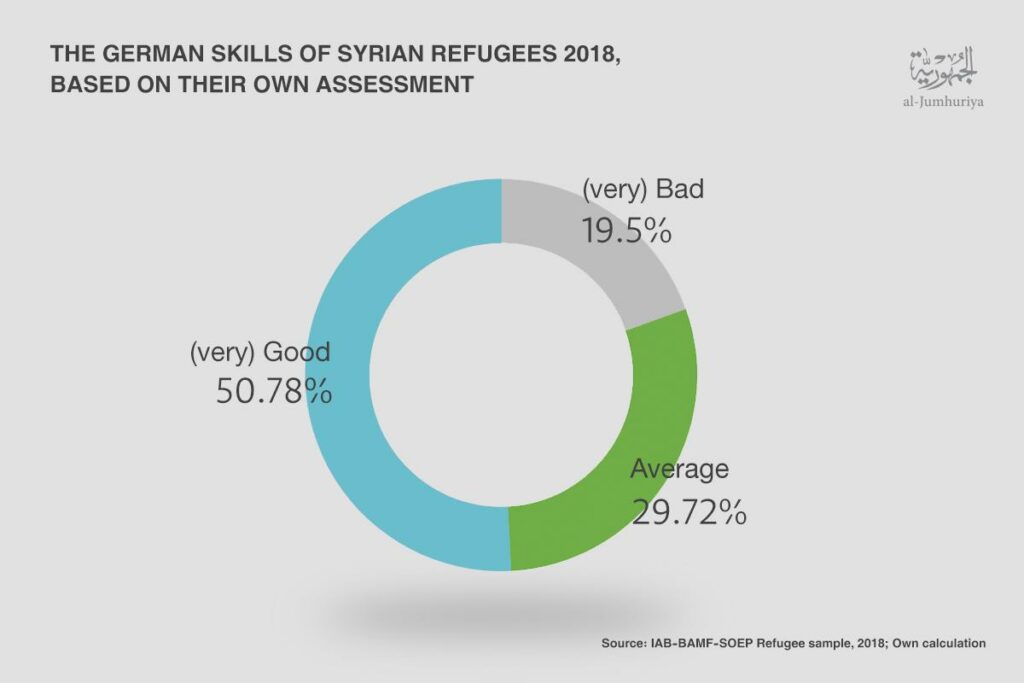 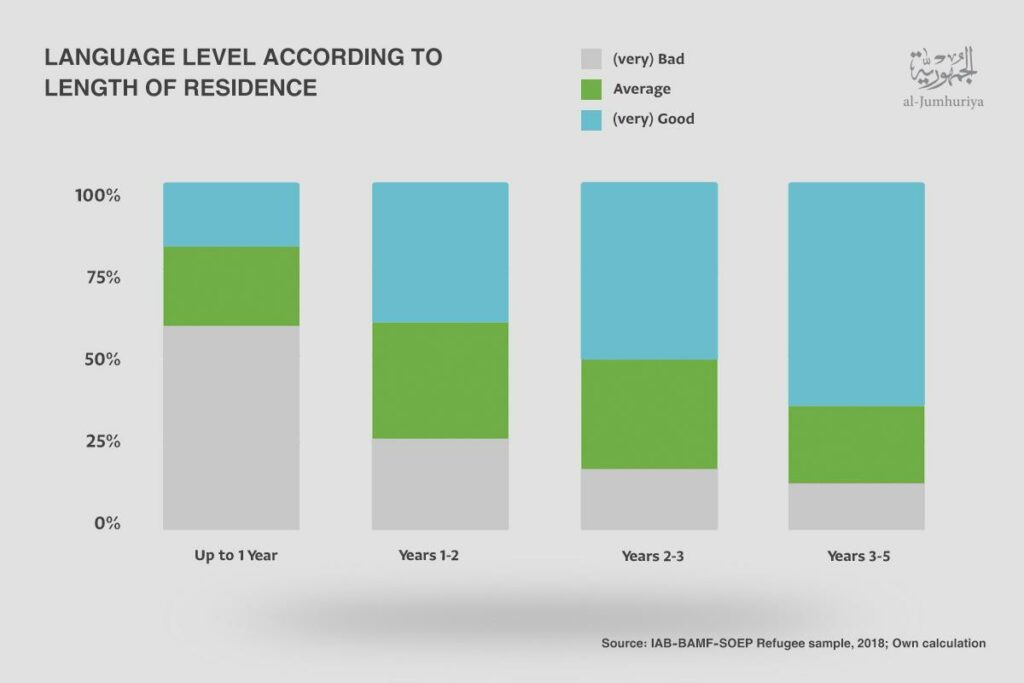 Social networks provide access to information or job offers that would otherwise be missed. In general, immigrants are more likely than natives to rely on networks, because of language barriers and a lack of familiarity with the formal job search process. However, in Germany, the effectiveness of networks for immigrants may be relatively low, since formal qualifications are more important in the German labor market, even for basic jobs. 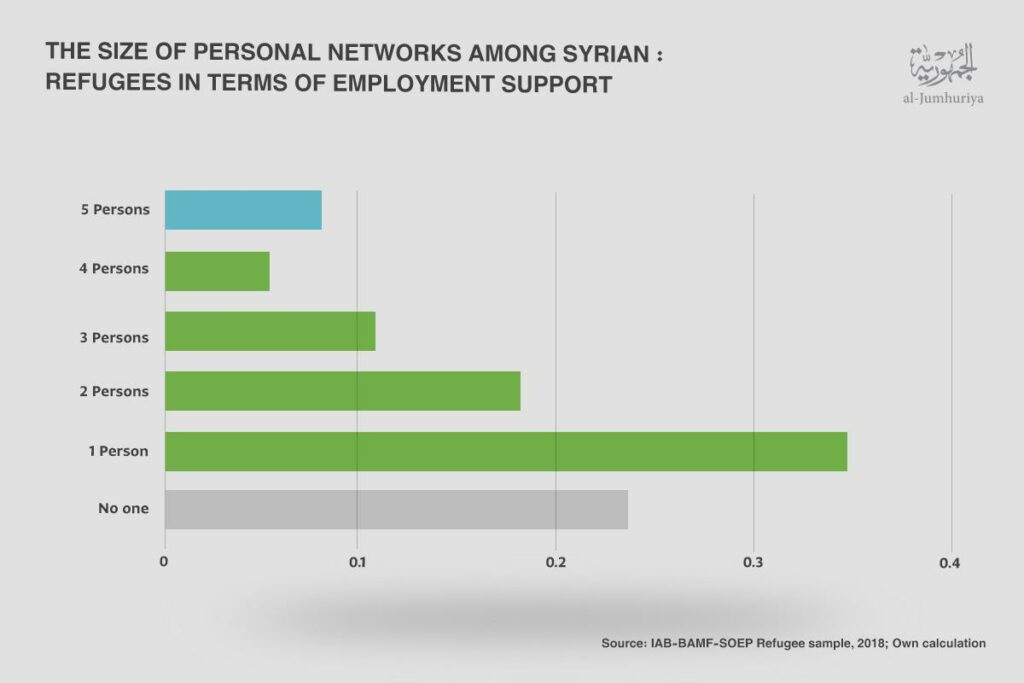 To the question, “Who supports your advancement in your career or educational training and fosters your progress?” Syrian refugees responded with an average of 1.6 persons in their personal network as important for advancing in their career or their integration into the German labor market. Women had slightly larger networks than men, and these were much more family-oriented (comprising parents, children, siblings, spouses, cousins, and so on). The younger the refugees were, the larger were their networks. Educated refugees had access to larger networks than those with less or no education. In total, more than 80% of the Syrian refugees interviewed mentioned at least one family member among their network. For 67.5% of all individuals, their networks consisted entirely of family members. 80.6% of those questioned had at least one person from Germany among the non-family portion of their network. 12.8% of people named at least one professional helper among the non-family share. All professional helpers came from Germany.

The employment rate of refugees has also increased significantly over time. On average, 32% of all Syrian refugees who moved to Germany from the beginning of 2013 to 2018 were employed as of the second half of 2018. 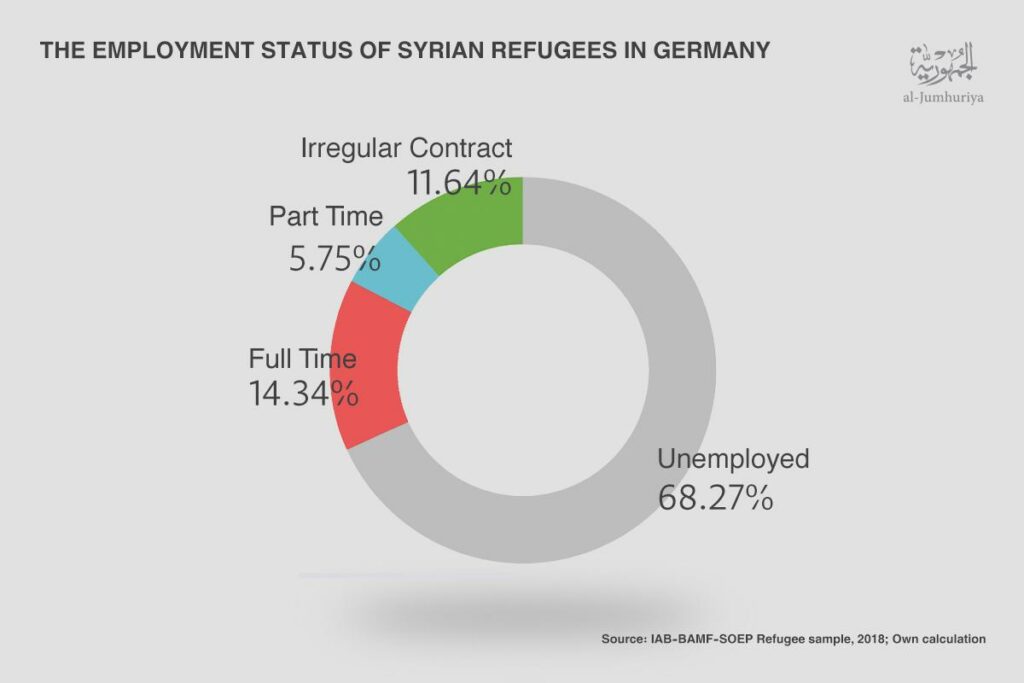 Among employed Syrian refugees, 63% worked full-time or part-time; 19% were in paid training; and 18% were marginally employed in the second half of 2018.

There is a considerable gap between refugee men and women when it comes to gainful employment, though this decreases somewhat as the length of stay increases. Between three to five years after moving to Germany, 48% of men were employed, compared to only 14% of women. This gap may be attributed to reasons of family and children, as well as to the care situation of (small) children. Women with small children in particular are only employed to a very minimal extent. 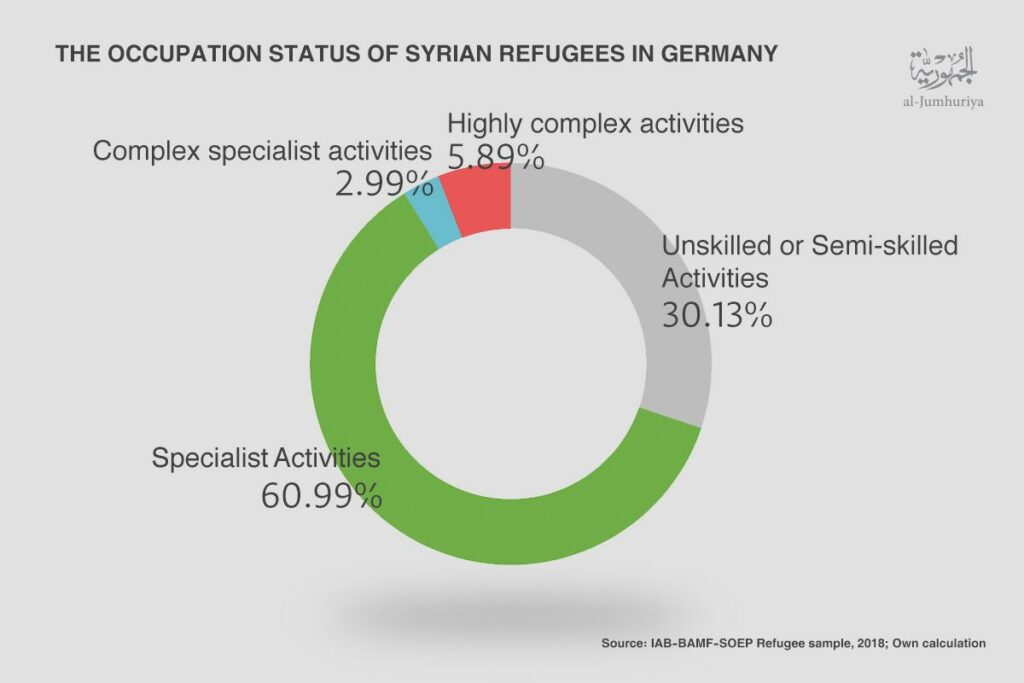 However, there are considerable differences with the employment structure distribution prior to migration. According to the refugees surveyed, the majority in Syria were working in either skilled or highly-skilled activities. It should be taken into account here that the technologies and processes of production and organization used in Syria differ from those in Germany, rendering the activity structures not completely comparable.

On average, the earnings of Syrian refugees are very low when they enter the labor market, but they increase over time. Average gross monthly earnings of employed refugees are positively correlated with their length of residence in Germany. In their first year in Germany, average monthly gross wages for paid employed Syrian refugees amount to approximately 800 Euros. After five years of living in Germany, this figure rises to around 1,300 Euros. As for refugees employed full-time, the average monthly gross wage after five years in Germany was 2,150 Euros. The significantly stronger wage growth for all employed refugees is also due to the fact that the share of part-time employees, the marginally-employed, and trainees has decreased over time.

Average gross monthly earnings of full-time employed Syrian refugees amount to approximately 60% of the corresponding figures for those born in Germany. However, it must be taken into account that earnings in Germany increase very strongly with employees’ seniority and work experience. 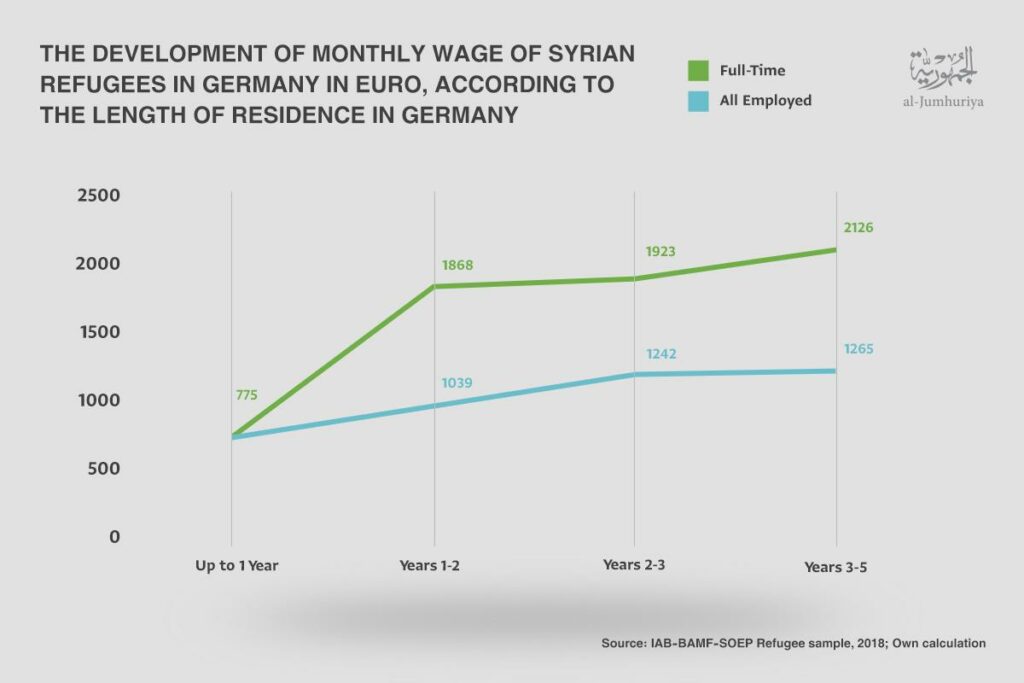 Impact of the Coronavirus pandemic

By the end of 2019, the integration of Syrian refugees into the German labor market was showing positive development. However, the spread of the Coronavirus pandemic in Germany in March 2020, and the accompanying measures such as lockdowns and restrictions of movement, have had huge negative impacts on this integration process. Even if these lockdowns are only temporary, the fight against the Coronavirus will preoccupy the country for the foreseeable future. It is likely that these measures will have medium- and long-term consequences which will affect all sections of society, and especially the weaker members of it. From professional language courses to legal advice centers, and the lack of legal remedies and first employment contracts, people are currently deprived of many things they need to gain a foothold, especially since their residence status is not always granted. Moreover, an economic crisis caused by the pandemic could also have dramatic consequences in this earlier phase of economic integration. This holds for both groups; those who are still preparing to enter the labor market (e.g., are taking language courses), and those who have already done so, but are still at the beginning of their careers, with an unstable employment status.

The labor market integration of Syrian refugees in Germany has shown swift positive development within a relative short time. However, the integration process remains fragile, and in its early stages. Much work remains ahead for both Syrian refugees and the German authorities. In this time of crisis, in particular, it must be a priority to protect what has been achieved.