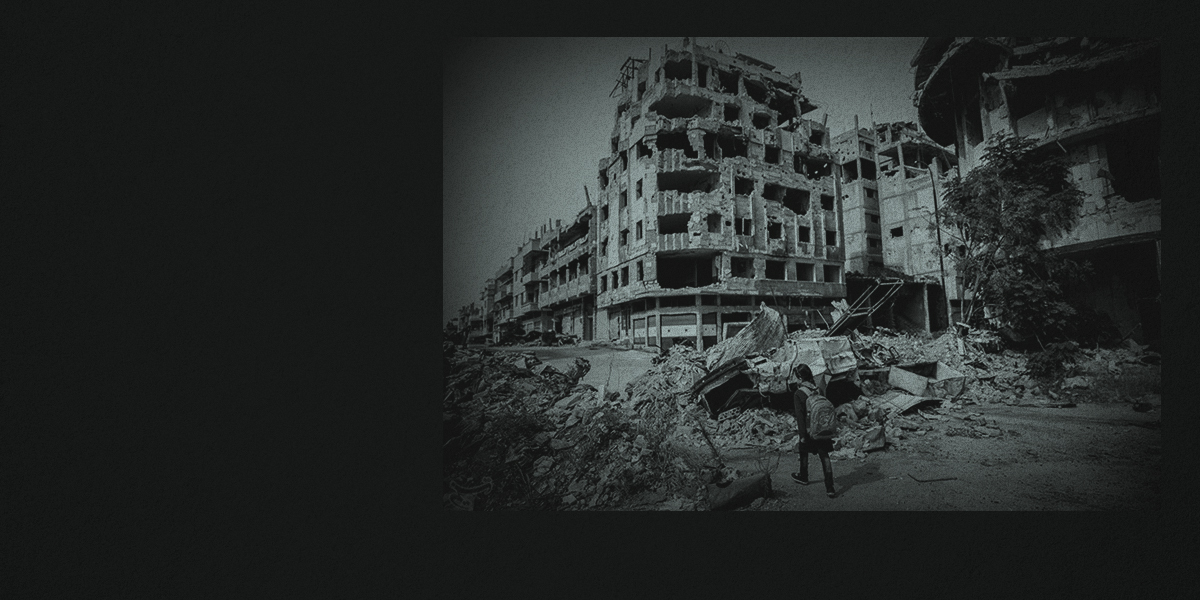 On the tenth anniversary of the Syrian uprising, Mona Rafea writes from inside Homs, the devastated city once dubbed “the capital of the revolution.”

[Editor’s note: This article is the first of several that will be published in the coming days to mark ten years since the outbreak of the Syrian uprising. It was originally published in Arabic.]

As you count the small wrinkles that have surfaced on your face, someone comes to tell you ten years have passed. You feel you cannot quite distinguish between being awake and asleep; between being alive and dead. You check the calendar, and count on your fingers: two years; five; seven; nine; ten… In the first year, you were there; in the third year, you were somewhere else; in the fifth, you were in yet another place; and by the tenth, you no longer remember the places, as you have forgotten yourself, and time has forgotten you. In truth, you prefer it that way.

But where are you?

You remember what was, ten years ago. They force you to remember it, even though you would rather forget, for no reason other than that you can no longer bear the pain; you can no longer bear to recall the losses and blood and devastation and mire. You have chosen to say nothing, to add nothing, because you know perfectly well everything that has been said; because you have memorized it, sickened of it; because you want to look forward and forget what’s behind. Yet what’s behind weighs heavily—very heavily—and pulls you backwards all the time; grabs you by your clothes and hair; begs you not to leave it, and to put it in front of you. When you relent, and turn to it, it tells you, “Aaaaaaaah…” Your chest heaves with the sigh, and you surrender to it, and take pity on yourself at last.

But where are you, now?

I am in Homs now. I walk its streets; those destroyed and those intact. I look at the faces, the markets, the goods, and tell myself: That cruel face that just passed me would suit a killer under the ground; and that kind face could be a martyr, mistreated and murdered by a treacherous bullet. This is my hobby in the street; categorizing the faces of passersby. That one is a killer; that one there is a victim; over there goes a martyr; that way a butcher. With some faces, I tell myself: Perhaps this killer is awoken by his conscience in the night. Maybe that martyr had a story he wanted no one to know about. I stop the game, and scold myself, but these small judgments are ultimately my efforts to overcome a final impotence; an accumulated failing that pushes one to the most wretched, meaningless acts.

On the phone, a sad voice says the last ten years passed like a long dream of which we still await the end. I agree, and peer up at the sky, where the falling rain looks like iron rods, and the sun looks like yellow sorrow. I listen to people, and their words sound like euphemisms for a defeat they are too ashamed to acknowledge.

Everyone’s favorite game here seems to be calling things by false names. Thus we have lived “the war” for ten years; and the current suffocating “crisis” is due to “the government;” and the poverty is caused by the “tycoons;” and the “wise leadership” issues decrees without regard for the people’s circumstances; and the “authorities” seize a young man and kill him “unintentionally.”

Such pathetic euphemisms are people’s way of getting around the unspoken truth. This has its price. One feels here one has been completely disfigured, as has one’s mind, and very existence. To build a safe existence here requires demolishing everything in your heart. To protect yourself, you have to lie to the fullest possible extent. Fear and frustration are your daily lot. If ever faced with truth, or a lie too great to handle, you have no choice but to escape and disappear until you regain your breath.

Head on shoulder, a friend says, “We fritter away our days with distractions.” We bow our heads in agreement.

Another says, “Our lives are going to waste in this miserable country.” We bow our heads in agreement.

Another says, “If only what happened hadn’t happened.” This time, the movement of heads is confused. Our eyes stay fixed on the ground. There are no words. Talk of “what happened” is a riddle at times; or a distant past better left behind; or selected memories of events from which we emerged alive by near-miracle. The lips decline to say any more than that, while the mind blazes silently with the memory of “what happened.”

The coincidence of the two—the passing of ten years, and the upcoming “presidential elections”—does not make either easier to deal with. The woman whose husband was killed, who once vowed to cook in the street and give out free food if the regime fell, can hardly believe we’ve reached this point, and are talking about elections. She isn’t the only one.

We do not need a tenth anniversary of the revolution in order for us to speak to it in our hearts, because it is renewed each morning we wake up to new sorrow, whether we like it or not. One doesn’t need to be “revolutionary,” in the active sense of the word, in order to affirm that one rejects everything that has happened, and still happens.

The heart may struggle at times to bear the inability to undertake the act which must be undertaken, but cannot be. Yet the heart also has no choice but to beat on, carrying all those aahs and losses and distress, which cannot be forgotten no matter how much time elapses.

We are here. We still search for a joke in order to smile amid everything that’s happening. Rarely do we find one, however, which is why we rush to Facebook pages to send out smiley faces, in another false substitute for the real smiles we lost years ago.

We’re still here, in Homs. There is still a firmness within us. We walk, and sleep, and eat, and fear, and dream. What matters is that we still dream. The one thing we are still certain of is that no one can uproot what is in our hearts, no matter how much the opposite may appear to be the case.

Mona Rafea
Alex Rowell Alex is a Beirut-based writer, translator, and managing editor of Al-Jumhuriya English. His first book, 'Vintage Humour: The Islamic Wine Poetry of Abu Nuwas', is due to be published by C. Hurst & Co. in November 2017. He tweets @alexjrowell.