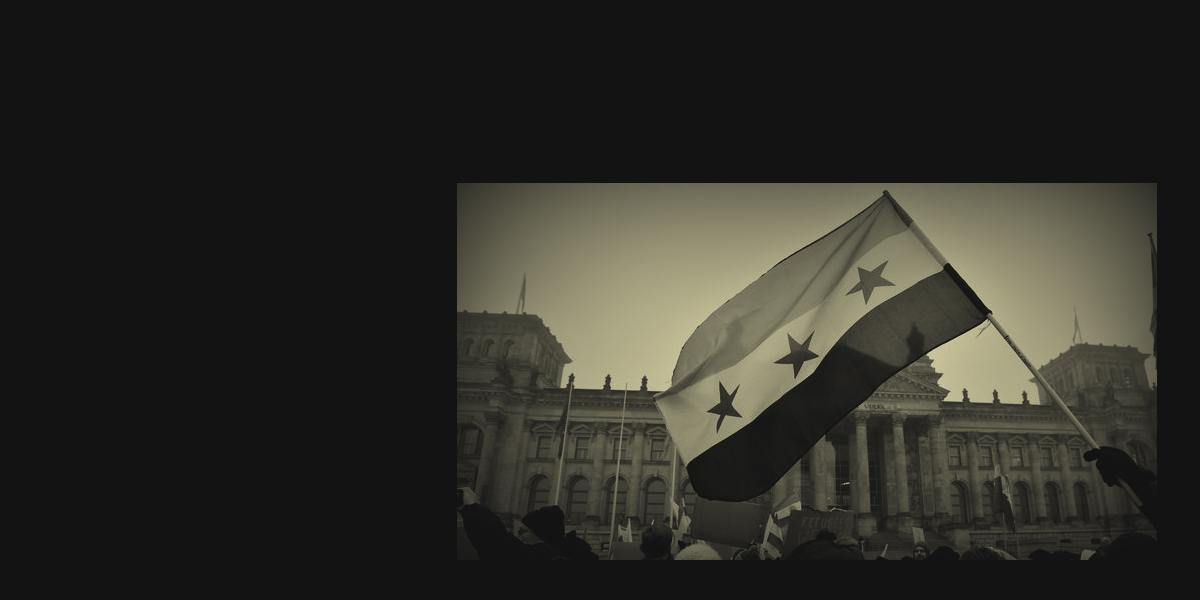 Here and there: On de-provincializing the Syrian Revolution

Ten years on from Syria’s revolution, it’s high time Europeans grasped that Syrians’ struggle is also their own, and that Europe’s future cannot be roped off from the Middle East’s, argues Prof. Joachim C. Häberlen.

Revolutions, past and future

Looking at the past, Walter Benjamin’s Angel of History famously sees nothing but “one single catastrophe, which keeps piling wreckage upon wreckage and hurls it in front of his feet.” The Angel might want to pause to resurrect the dead and reassemble what has been blown to pieces. But alas, there is a storm blowing from paradise, keeping the Angel from closing his wings. The storm, coming from the origins of time itself; from paradise; drives the Angel to the future, all while the wreckage of history is piling up in front of him. That storm, says Benjamin, is what we call progress.

Had Benjamin’s Angel of History looked at revolutions in general, and at the Syrian Revolution in particular, he would have seen exactly this: a single catastrophe; nothing but destruction and death; destruction and death which have not ended. But he might also have seen something else; a reflection in the eyes of those he sees: eyes turned towards the future, towards emancipation; a future the Angel cannot see. For any revolution—the Syrian Revolution as much as its French or Russian counterparts—is a promise for the future; a dream; a vision for an alternative to what is, to a seemingly eternal present. It’s not an abstract future; something to be achieved in many years if not generations to come, like a paradise that will never arrive. The future promised by a revolution begins to materialize in the revolution itself. The future is now. The revolution, that is, offers a glimpse into what might be, and perhaps into what once was. Despite all defeats, despite all the wreckage that piles up, this revolutionary promise does not go away. Something once considered impossible suddenly became possible, and will remain a possibility. (This is not only true of the Syrian Revolution; consider how the French Revolution created the possibility of future revolutions, both feared and desired.)

I am not Syrian; I don’t speak Arabic; I did not live through the Syrian Revolution. It’s hardly up to me to say what kind of future the revolution envisioned, if any. Perhaps it is true, as Maurice Aaek suggests, that the Arab uprisings were not “the beginning of a revolutionary tradition grounded in liberty and ushering in a new public sphere,” and that the “oppressed rose up without the promise of liberty.” Perhaps the promise of the Syrian Revolution, or the Arab uprisings more generally, was marginal; perhaps these were only splinters and fragments. Yet when I listen to how Syrian friends who fled to Germany—not intellectuals; nor people who played any leading roles in the revolution; just “ordinary” Syrians, though they are anything but ordinary—speak about the revolution, there is something that I, as an outsider, find inspiring, revolutionary, and meaningful, for us, here in the West. They speak about a beauty to which the revolution gave birth. They recall the exhilarating feeling of freedom when chanting in the streets. They talk about the improvised revolutionary “local councils;” democratic institutions on the ground that demonstrated how society could function without the centralized, dictatorial regime running it. To be sure, any critical history of the revolution would point out the failures and deficiencies of these councils, and romanticization of the revolution ought to be avoided. Still, they offered a powerful glimpse into what might have been.

One task for the present—for the question, “What next?”—might then be to understand this promise for the future, and to salvage it from the wreckage of war and violence. This is how and why history might matter, here and now, in the present, as Nayla Mansour so powerfully writes. The task is not so much to account for failures, defeats, and mistakes that were made, but to keep open the space of possibilities the revolution has created. These are histories of possible futures that have not yet come to be; they remain unfinished business, as it were. It would be a history not for the sake of telling stories, but to connect the past and present through the imagination of something better.

Revolutions, there and here

For the average sympathetic German (or, more broadly, Western) observer of the Syrian Revolution (and there were many who lacked such basic sympathies), it was a far-away revolution that had little to do with us, the Westerners. Syrians struggled—and this is what arguably generated sympathies—for what we already had: democracy, the rule of law, accountability, freedom. But it was their struggle, not ours; after all, we already had (and have) all those great things. The struggles remain incommensurable. The future the Syrian Revolution promised, or so it appeared from the average sympathetic German perspective, was the future we already have; it is our present. Thus, we might well support Syrian revolutionaries in a fraternal manner, but only as older brothers or sisters who have already emancipated themselves. (And, to be sure, Western leftists shouldn’t act like elder siblings telling their younger counterparts what to do; something they have done all too often in the past.)

Suggesting that the revolutionary struggle in Syria might be relevant in Germany, or elsewhere in the West; that this might also be, or become, “our” revolutionary struggle; would seem horrendous and outrageous. No doubt, we aren’t living under a brutal and corrupt dictatorship killing its citizens. Yet, it would also be profoundly subversive, because it would question the legitimacy of our political and societal order. It would imply that our present is not their future, but that the possible and better future into which the Syrian Revolution, or at least fragments of it, allowed a brief glimpse might also be a possibility for our future. And this can’t quite be. Surely, we don’t need any revolution (only leftists on the very fringes of the political spectrum nowadays talk about revolution, and hardly anyone takes them seriously anymore). The effect of this perspective is that the Syrian Revolution remains provincialized. Perhaps it matters for the Middle East, but not for the rest of the world, like the French and Russian Revolutions, or for that matter the movements of 1968, which sparked hopes and fears of revolution across the world.

Yet we need to make this connection from a faraway “there,” where a revolution might be necessary, to a “here,” where the idea of revolution sounds at best absurd. We need to ask if and how the future of the Syrian Revolution might be a future for us; if and how what happened in Syria might be of relevance for struggles elsewhere—struggles, in the most general sense, for democracy, for liberty, and not least for solidarity. This might yield new alliances for a common cause; a cause that, as it were, incorporates the cause of the Syrian Revolution (whatever this might be exactly) but also points beyond it. (Just to be utterly clear, it would be more than foolish to compare the Assad regime with Western democracy, no matter how much we may criticize the latter. Still, this doesn’t mean that the future promised by the Syrian Revolution is already our present, rather than our own potential and better future as well.)

I have argued elsewhere that stories and arguments about the “refugee crisis” are fundamentally and exclusively about Europe and what it stands for. What happened elsewhere, before people became refugees, is of scant interest beyond some vague reference to war, terror, and poverty from which people try to flee, as if there are no political struggles in those places. Just as we need to provincialize Europe by acknowledging political struggles elsewhere in the world, so we need to universalize Syria and the region to see how the revolutions of the Arab uprisings have meaning beyond the Middle East.

This text began as a reflection on a webinar titled “Where next for the Syrian struggle?” featuring the Syrian activist Marcell Shehwaro; the Lebanese scholar Ziad Majed; We Crossed a Bridge and It Trembled author Wendy Pearlman; and Al-Jumhuriya co-founder Karam Nachar (the webinar is available here). Do these abstract and perhaps slightly speculative reflections above offer an answer? What might they mean in practice?

Most generally, they call for acts of translation—from the past to the present and the future; from “there” to “here.” How can we de-provincialize the Arab uprisings, and in doing so remember them for the living, not only “there” but also “here”? Such translations of experiences into different contexts would require efforts, indeed Herculean efforts, from both sides; from Syrians and even more so from “us” here in the West, who would have to consider as relevant the experiences and ideas from “backward” places. (It is striking, given all the discussions about racism, that this does not already happen: even from leftist perspectives sympathetic to refugees, the struggle “here” against racism, for instance, seems entirely separated from the struggle “there” for democracy and liberty. In a strange way, the anti-racist discourse excludes the voices and political lives of those it purports to support.)

How to do this? I have no ready answer, but it seems to me to be an intellectual exercise that can happen only in the form of a dialogue that might facilitate such translations; that might bridge the gap between the “there” and the “here.”

Joachim C. Häberlen is an Associate Professor of Modern Continental European History at the University of Warwick. He has published several books in English and German, most recently Wie aus Fremden Freunde werden, a collection of essays on the political significance of friendships between Germans and refugees.

Joachim Haeberlen Joachim C. Häberlen is an Associate Professor of Modern Continental European History at the University of Warwick. He has published several books in English and German, most recently Wie aus Fremden Freunde werden, a collection of essays on the political significance of friendships between Germans and refugees.