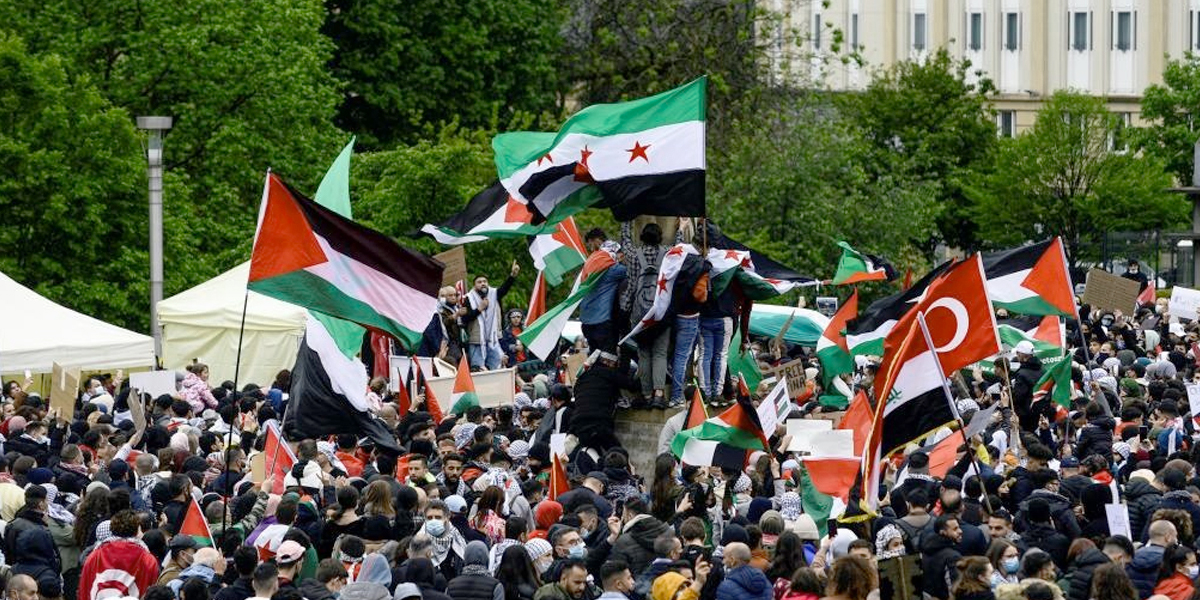 In Gaza’s rubble, Syrians see their own

The recent support for Palestine expressed by Syrian revolutionaries is no surprise, and certainly no contradiction, writes Al-Jumhuriya editor-in-chief Yassin Swehat.

The sight of Syrian revolution supporters demonstrating in solidarity with the Palestinians in various cities across the diaspora, and voicing this solidarity in the press and on social media, shows us a new kind of language and expression; one which brings Syria’s last decade to the center of the stage.

“This rubble looks like our rubble,” it seems to say. “These fighter jets look like the ones that kill us. The idiotic apologists for this butchery look a lot like those who justify Assad’s crimes in their sophistries, false equivalences, and whataboutisms. We know these images of first responders in the moments after airstrikes; their pained splutters as they lift the debris; the bloodied faces of the children; the news of loved ones and friends killed. All this we know in our bones. We know whose lives are dispensable, because our lives are dispensable. We know what killers look like.”

The sight of the young men and women waving Syrian revolution flags, declaring their presence and solidarity with Palestinians in the squares of the capitals of their shared exile, calls on us to ponder the roots of this solidarity, and what it means for ourselves and others.

One often hears a particular kind of nonsense—geopolitically opportunist, and devoid of values—which denigrates Syrian support for the Palestinian cause as a mere “remnant of Assad regime indoctrination;” “politically unproductive;” or even “objectively allied” to the pro-regime camp. While it isn’t the intention of this article to respond to these recurrent claims, it’s worth noting in passing that the spectacle of Syrian revolutionaries supporting the Palestinian cause actually suggests the very opposite of “Assad regime indoctrination.” That Syrians’ lived experience stands at the center of their stance regarding Palestine means the revolution against Assad has become their ethical starting point for political action, and their mechanism for sympathizing, identifying, and expressing solidarity in a manner that differs considerably from previous Syrian involvement with the Palestinian cause. 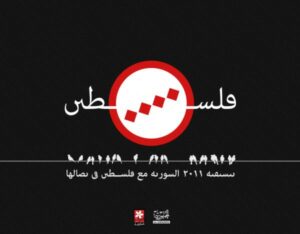 The solidarity of Syrian revolutionaries with Palestinians that we’re currently seeing does not only denude the regime and its pseudo-anti-imperialist fans, and their empty words about Palestine—which is certainly a desirable, necessary, and excellent development. It also goes beyond the limited framing of the issue as a Syrian “national question” vis-à-vis Israel’s occupation of the Syrian Golan, and vis-à-vis Palestine itself too. These are questions that cut deep into the history, present, and future of Syria, irrespective of whoever rules it. They should be answered from a radical opposition perspective, above and beyond the particular quarrel with the Assad regime, and its regional and international allies, and their lies and contradictions.

There is a certain reductionist argument, calling itself “realist,” which asserts that the Syrian and Palestinian causes stand in opposing geopolitical trenches. In this view, the Assad regime is part of an “Axis of Resistance” led by Iran, confronting a revolt supported by the various opponents of this Axis elsewhere in the region. This notion—which has proponents among the Syrian opposition itself, who scorn criticism of Israel, with whom they would prefer to ally against the regime—is further nourished by the lamentable stances taken by various Palestinian armed factions and political movements vis-à-vis the Syrian cause, be they the PLO, Hamas, or Islamic Jihad. The support offered by these groups to Assad—both verbal and practical—has itself been a product of this same opportunistic logic, whether as a result of their direct subordination to the regime; or concern for their relations with Iran; or various unhealthy ideological contortions; or reasons even their own supporters cannot fathom.

Thus the cynical view offers no logical answers. Even if one tries to follow its proponents’ idea of “realism,” it fails to explain the criminal past and present of the Assad regime vis-à-vis the Palestinians in Lebanon and Syria, for example. Nor can it explain why the very same Arab regimes that are so eager to build alliances with Israel—and with Benjamin Netanyahu specifically—are also the ones keenest to end the diplomatic isolation of the Assad regime, and even to support it financially, were they not prevented from doing so by the Caesar Act sanctions.

Yet the significance of Syrian revolutionary solidarity with the Palestinians is not that it provides a better analysis than these cynical readings of the geopolitical situation, but rather precisely that it rebels against such abstract geopolitical equations. We oppose cynicism not just because it is analytically imprecise, but more importantly because we reject its values. There can be no confusion between those who bomb and those who lie bombed under the rubble: this is the starting point of all further discussion. Certain rhetorical evasions may be found by focusing on criticizing Hamas and decrying its conduct—both of which are unquestionably legitimate—yet these are short-term evasions, reminiscent of the pseudo-intellectualism of Assad regime apologists who are unable to stand decisively against Assad’s criminality, and so resort to denouncing the opposition factions. It’s not a matter of vacillating between two zero-sum contradictions. The Syrian lived experience is tremendously rich in such “complicated” positions, if we’re to assume the Palestinian cause is “complicated” to begin with, and that “simplicity” is a necessary condition for solidarity.

Images of a liberated self

The images of Syrian revolutionary solidarity with Palestine have been widely used in discussions in the past few days, especially in circles that cling to the symbolism of the left and anti-imperialism, in order to refute the allegation that Syrian revolutionaries were “agents” of reactionary, imperialist, and/or anti-Palestinian forces. These debates may have their significance in certain milieus, but the greater significance of the images lies not in what is seen by others—Palestinians, Arabs, Westerners, or whoever—but rather in what we ourselves see; we, the Syrians radically opposed to the Assad regime; when we look in the mirror of our stances.

It was always possible that Syrians’ horrific experiences, mixed with feelings of abandonment and protracted defeat, would lead to their imprisonment within themselves; a withdrawal into victimhood; an inability to identify or empathize with others; and a rejection of any interaction with any other catastrophes. This may in fact still occur; indeed, it is likely to do so in the circumstances currently prevailing across many Syrian communities. It may be a transient feeling felt by most of us at some point with this issue or that (and especially with the Palestinian cause, since, as the Arabic proverb goes, “generosity goes to relatives first”). Alternatively, it might manifest in a cynical, solipsistic mindset that explains the self and the world according to hierarchies of victimhood, leading its proponents to adopt the aforementioned “realist” view. That large numbers of Syrians were able to overcome this, and to turn their terrible experiences into forces for solidarity and identification with Palestinians, without letting “complexities” get in their way, is evidence of a cognitive and political maturity suggesting an ability to produce elevated meaning out of dreadful suffering, and to use the latter to formulate a discourse and political effectiveness.

For now, this effectiveness remains seasonal, and confined to the realm of reaction, but it invites us nonetheless to work to consolidate and crystallize it within a liberated Syrian self; one created by the post-2011 generation.

[Editor’s note: This article was originally published in Arabic on 19 May 2021.]

Yassin Swehat
Alex Rowell Alex is a Beirut-based writer, translator, and managing editor of Al-Jumhuriya English. His first book, 'Vintage Humour: The Islamic Wine Poetry of Abu Nuwas', is due to be published by C. Hurst & Co. in November 2017. He tweets @alexjrowell.