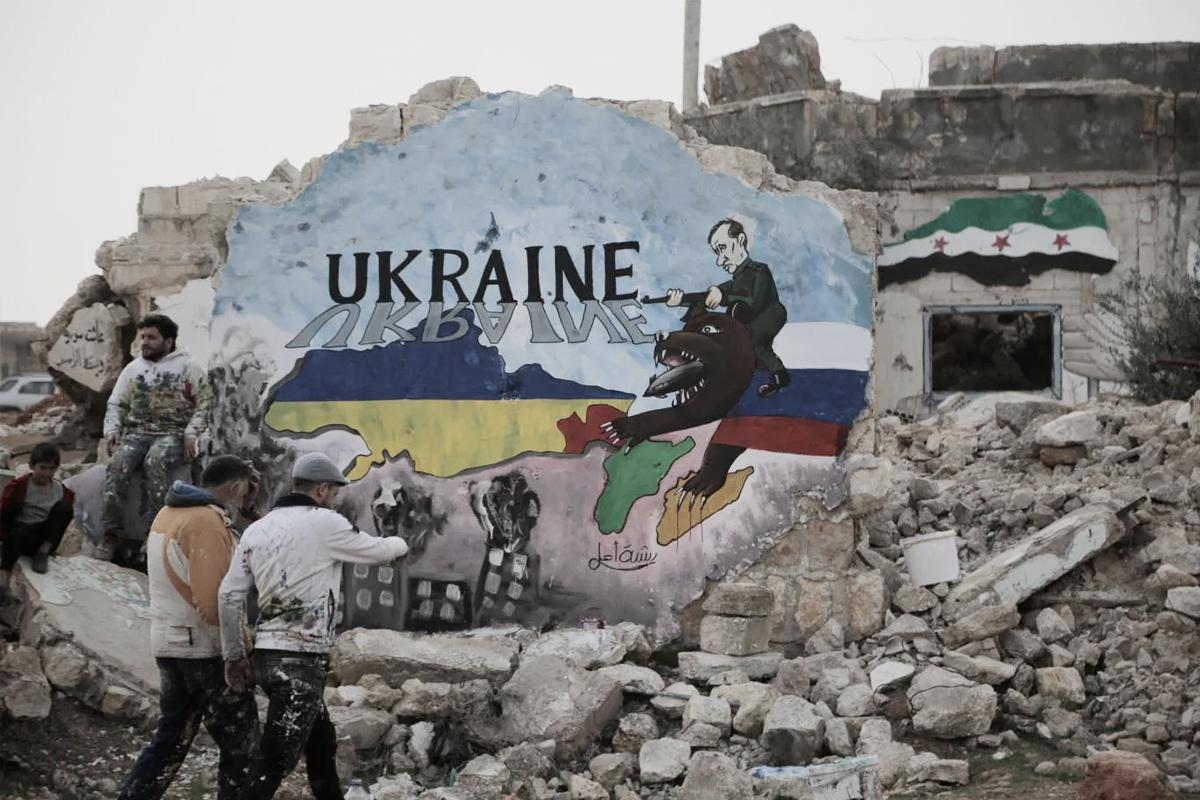 Ukraine in Syria, Syria in Ukraine

Thos commentary was first publihsed in Arabic, and was transalted to Spanish by Naomí Ramírez Díaz. The following is the English translaiton of the Spanish version.

By Yassin Swehat, translated from the Spanish by Joey Ayoub, itself a translation from the original Arabic by Naomí Ramírez Díaz.

What is happening in Ukraine is not alien to Syrians who oppose the Assad regime. We see this not only in the media coverage and the intensity of social media activity, but also in the participation of Syrians in the diaspora protests against the Russian invasion which have filled the streets of Europe and the US in recent days. This active reaction goes beyond mere solidarity towards identification with Ukrainians. Deep in the background, some of us, Syrians, feel apprehensive and, further down, slightly bitter. Let’s start with the latter.

Bitterness does not mean ‘offended victimhood’ because the world is caring for others, or the delusional belief that someone deserves to win the race of suffering. Nothing can be said about that kind of bitterness. Ours, however, is bitterness about Syria’s invisibility; the worldwide indifference to its prolonged cause against Putinism, both before and during this war. Seven years into a savage Russian intervention in Syria, massacres, huge disinformation campaigns and a sweeping moral war against everything that is not pro-Assad, one is enraged to see pundits and journalists discover, just last Thursday, the atrocious imperialist dimensions of Putinist Russia. In recent weeks, we have read pages upon pages of analyses diving deep into Russia’s strategies without mentioning Syria and the significance of Russia’s earlier invasion of that country. Without understanding Syria, the current Russian war against Ukraine cannot be understood, neither in terms of the human costs nor the values it embodies. Some are surprised today that Putin engages in chaotic military attacks rather than in cold and strategically calculated ones, that he does not care about the suffering of his victims, or that his own language and propaganda machine are full of lies, violence and a tone of extermination. What is happening? Is it just self-indulgent ignorance, or disgusting racism that considers it ‘natural’ for ‘uncivilized’’countries like Syria to be destroyed and drowned in blood? Or perhaps it is both?

After bitterness, there is inevitable apprehension about the brave Ukrainian forces resisting Putin’s invasion. The amazing bravery and perseverance deserve our respect without a shadow of a doubt. But for an opponent of the Syrian regime, there are no reasons to feel further closeness. With a few notable exceptions in the circles of culture and human rights, Ukrainian political forces have shown little interest in us, the Syrians who are fellow recipients of Putin’s atrocities. With dominantly nationalist forces on the ground, there is nothing a Syrian can subscribe to. Contempt for Putin’s attempt to color his dirty war with a call to ‘denazify’ Ukraine does not contradict the need to point out that there are substantial neo-Nazi and ultra-nationalist Ukrainian organizations on the ground, with both a considerable militia presence and an influence at the state, army and security levels. What Arabs or Muslims can expect from such organizations is hardly different from the racism of the Putinist right-wing and its financial sponsors. Let alone, of course, the Zionist zeal harbored by many Ukrainian politicians, including President Zelenskyy himself. For that reason, maintaining a critical distance from these forces is imperative and in no way inconsistent with supporting the right of Ukrainians to self-defense. Since the outbreak of the Syrian revolution 11 years ago, what we have experienced places us in a uniquely fitting position to approach this issue with critical sensitivity.

That being said, bitterness and concern by no means preclude a broad process of identification, one that is deeper than mere ‘solidarity’. Not only is Putinist Russia a mutual enemy, but more importantly, we know those tanks and we recognize those planes. The father who cries as he carries his frightened daughter to a shelter is like any father running through the streets of Aleppo due to regime and Russian bombardment. The doctor who collapses after failing to resuscitate a girl with shrapnel in her head and starts loudly cursing Putin has the same tone as the doctor in Ghouta who stitched up ever-increasing wounds while the soldiers of Kadyrov, Putin and Bashar al-Assad were a mile away from his hospital. We identify with the images of bus queues, and we recognize the image of the woman dragging a heavy suitcase through a border crossing. We know them: this is our life, those are us. We have evolved to identify with such scenes. It still requires enormous human capacity to translate this identification to cultural bridges and spaces of understanding and empathy both in Syria and in the world, both in dear need of that. This, in addition, is an important political capital in which to invest and grow.

Indeed, bitterness can become an added political value if it resists turning into self-flagellating or hateful victimhood, instead transforming into quest and energy. The same with apprehension, which can also turn into an ability to examine details and nuances to develop complex political positions, one that breaks with tribalism, be it puritanical and denialist.

With its reckless imperialist arrogance, Putinism today finds itself in the most delicate situation of its history. This requires us, pro-democratic Syrians, to take quick and wide-ranging political action: to identify ourselves with Ukrainian civilian victims, who are suffering what we have suffered and continued to suffer; to salute the bravery of Ukrainian fighters in their defense of their country, but without giving up the necessary political and ethical distance from a large portion of them; and to tell the world “we had told you so.” The latter should not aim at meaningless revenge worthy of Facebook narcissists, but instead placing the Syrian cause at the heart of current international political debates. Syria is what the world must focus on during its battle against Putinism and its Syrian lackeys, now that many are discovering that Putin is a murderer.