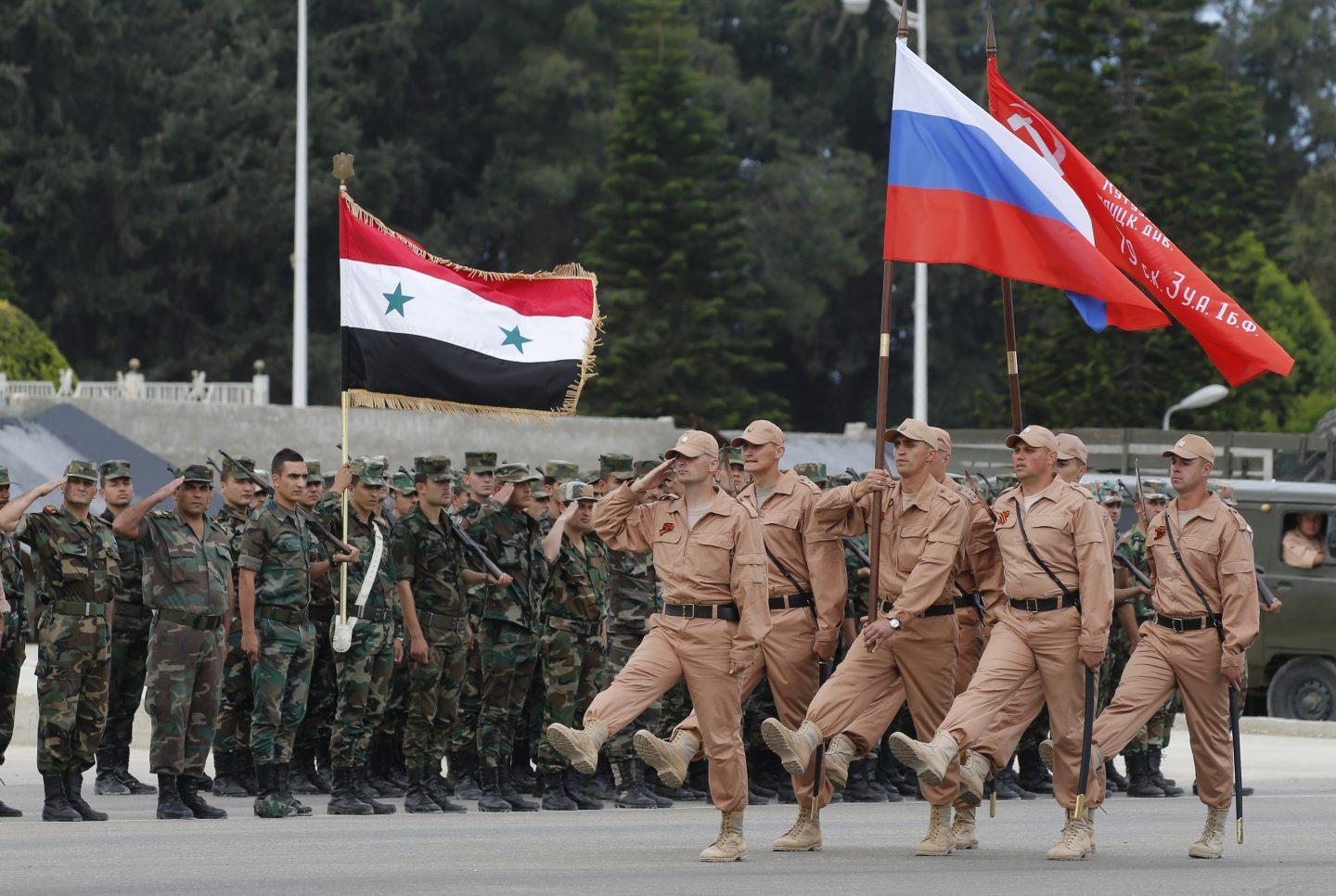 Up to recently, it had seemed that many people in the west think that the Russian War in Ukraine is qualitatively different from the one it has been leading for six years and a half in Syria. While one witnesses international outrage at the Russian invasion of Ukraine, and European countries are already arming Ukrainians against the invaders, not a single western country condemned Russia’s war in Syria or demanded that Russian forces withdraw from the country. The war on terror, understood implicitly as a war against militant Islamism, has created a common ground among the US, European countries, and Russia in Syria. This ground is also shared by many authoritarian and kleptocratic regimes in the region, and of course by Israel. Incredibly enough, there were hardly any voices opposing this war, even among intellectuals and human rights organisations. Even left-wing authorities such as Noam Chomsky deny that the Russian war in Syria is imperialist because Russia is supporting the “government.” What if the “government” is a permanent civil war against the majority of its population? What if it is genocidal? The same authority is now supporting Ukrainian right to defend their country, but never Syrians.

The relations between Western powers and Russia have never been closer to war since the WWII than after the Russian invasion of Ukraine, while the US and Russia was never closer to each other than in Syria after the chemical deal in September 2013. To put it differently, there have been two Russias in Syria, one of them is called the United States of America, and whatever Russian Russia has been doing has been essentially acceptable by the American Russia. It is not yet clear if this imperialist brotherhood would change after the invasion of Ukraine where Russian Russia is now considered the bad guy. For one, I doubt it very much.

In Syria, Russia’s war is a continuation of the war a genocidal regime was waging against its rebelling subjects, a war that had been going on for four years and a half up to late September 2015, when imperialist Russia intervened. In Ukraine which is, unlike Syria, a neighbor to Russia, the war is against an elected government. Syria has not had free election for 60 years, and that is one main reason why we had a revolution (turned later into war). However, the two wars have something in common between: both are against local people, far weaker than the aggressor. Both are led by authoritarian Russia that expressed openly its hostility to democracy, whether in Russia itself, or in Ukraine and the whole post-soviet region, or the Middle East. Putinist Russia has expressed openly its enmity to the “Arab Spring.”

It is uncertain that Putin’s regime would have waged its war of aggression if his war in Syria was faced with powerful international opposition. It is precisely because Syria is not a neighbor to Russia, gaining undisputed mandate over her was a great boost to Putin’s imperial ambitions. Invading Ukraine is by no means a rupture from this imperialist ambition, it is a step further in resurrecting the Russian empire. From their base in Syria, Russian warships moved to Ukraine (at least before Turkey closed the straits). This means that it is inconsistent and unethical to condemn the new Russian aggression without going back to the last expansionist war by the same regime, condemn it and help Syrians to retrieve their country.

Is it still possible for anybody after 24 February to divide Putinism to a pernicious face in Ukraine and a benign one in Syria? Unfortunately, the answer seems to be yes, not only among fascists and right-wing populists in Europe. In the first week after the war, there was already a not very nice collection of racist comments by reporters and politicians that hierarchize victims of war and refugees according to the color of their hair, skin, and eyes. Those who are like us, native and pre-migrant Europeans, deserve support, unlike Syrians, Iraqis, Afghanis, and Africans, or even post migrant Europeans. The Bulgarian prime minister Kiril Petkov even said: “These [Ukrainian refugees] are not the refugees we are used to. These people are Europeans, intelligent, educated people. This is not the refugee wave we have been used to, people we were not sure about their identity, who could have been even terrorists.” The narcissistic and self-congratulatory comments one hears from European and Western speakers are hardly surprising after the genocratic turn, despite the continuous buzz about human rights. However, Petkov’s “intelligent” comment would be misinterpreted if they were understood as a welcoming gesture to Ukrainian refugees. I think it is rather an expression of hostility towards the post-migrant condition in Europe.

Charlie D’Agata, a CBS News senior foreign correspondent, said that Ukraine “isn’t a place, with all due respect, like Iraq or Afghanistan, that has seen conflict raging for decades. This is a relatively civilized, relatively European – I have to choose those words carefully, too – city, one where you wouldn’t expect that, or hope that it’s going to happen.” In the Telegraph, Daniel Hannan wrote: “They seem so like us. That is what makes it so shocking. Ukraine is a European country. Its people watch Netflix and have Instagram accounts, vote in free elections and read uncensored newspapers. War is no longer something visited upon impoverished and remote populations.” The logic behind these two comments, picked out form many as AMEJA, Arab and Middle Eastern Journalist Association, displayed in a special statement about these racist statements, is that this should not happen to the Ukrainians because they are like us, and of course unlike them we are great because of what we are. Observers are left to conclude that it is okay if what is happening to the ones like us is happening to those who are not like us. It is part of what they are that they are impoverished, read censored newspaper only, and vote only in unfree elections.

Aimé Césaire, the great Martinique poet and politician, has something to tell these “civilized” people; in Discourse on Colonialism, he wrote: “what he [“the very distinguished, very humanistic, very Christian bourgeois of the twentieth century”] cannot forgive Hitler for is not crime in itself, the crime against man, it is not the humiliation of man as such, it is the crime against the white man, the humiliation of the white man, and the fact that he applied to Europe colonialist procedures which until then had been reserved exclusively for the Arabs of Algeria, the coolies of India, and the blacks of Africa”. It seems that this trenchant castigation of racist logic is still valid. In her book Frames of War, Judith Butler makes the case that racism institutes, on the level of perception, “iconic versions of population who are eminently grievable, and others whose loss is no loss, and who remain ungrievable”.

Even international writers who were able to write an open letter condemning the Russian invasion and supporting the Ukrainian people did not mention Syria once, at least as a precedent of the ongoing war by the same oligarchic regime. Most of the 1040 signatories never uttered a word about the Russian war in Syria. A signatory on the letter myself, I have noticed the differential distribution of solidarity, as well as the differential grievability of lives – a projection on intellectual life of the racist logic of global sovereignty and imperialism. It’s disappointing to see this logic propagate even in the context of condemning acts of imperialism, like the newest Putinist war.

A few months ago, I was in Ukraine, taking part in the Kiev Biennial. My participation was critical to the concept of solidarity and its practice in the West, especially selective solidarity, which seems to be quite normalised in Europe. Talking in Kyiv in November 2021, it did not occur to me at the time that in four months I would see this selectivity play out in relation to the same imperialist power, Russia: criminal in Ukraine, and not criminal in my country, Syria. Does this say anything about Ukraine or Syria, or even Russia itself? It rather says very unpleasant things about global powers, and the commodification of causes, which posit some as “solidarable” so to speak, and dismiss others, and usually in relation to a neo liberal marketization of causes, where those granting solidarity gain symbolic capitals in return.

Has this pattern experienced any change during the three weeks of the Russian invasion of Ukraine? It is some relief that more people in the social media, and even in the big mainstream outlets, are referring to the Russian role in supporting the monstrous regime in Syria, and in the hopeless situation in the country. More people are now remembering Aleppo, and that Russia targeted hospitals in many Syrian districts before doing the same in Mariupol. However, it would be naïve to think that this ushers in a paradigmatic shift. Russia is still a United States of America in Syria.

Ukraine should be defended, And Ukrainian people should be helped in their struggle for independence and freedom. The Putinist war is an act of pure imperialism, and it should be condemned, and full withdrawal of the invaders should be implemented.

But this must happen in Syria as well. If anything, the current dynamics look closer to Syrianizing Ukraine, letting it in full or partly to fall under occupation, than Ukrainizing Syria, helping Syrians in any meaningful way against Russian imperialism.

Through war, the world appears to be deeply interconnected, in spite of the active politics of disconnectedness, centered around borders identities.